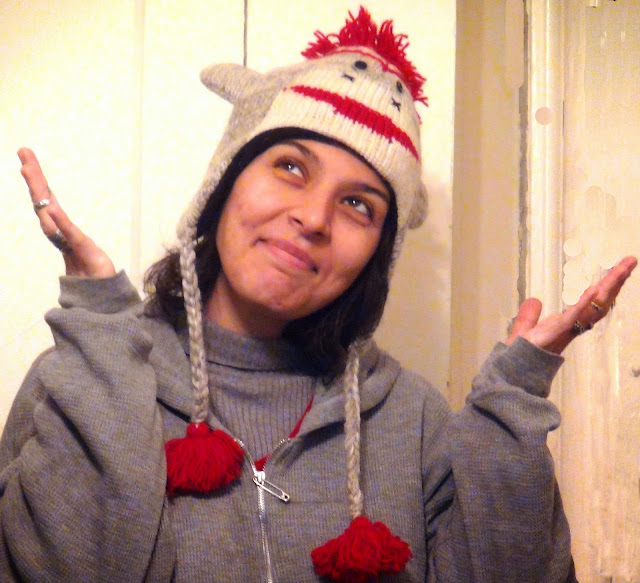 How Do You Get Over The Bittersweet? A Brand New Jaunty Hat, Of Course!
*Photo: Liz Free
People will tell you that all things happen for a reason. I will tell you that it has been a long six months. So much has happened, that I've barely had the heart, or perhaps the strength, to surface, to breathe, and to type it here.

But this is the starting point, and from here launches all good things. And so I will tell this strange tale of an even stranger trip.

To hear the Roma (gypsies) tell it, by superstition's law (and I neither will confirm or deny that I am a follower of such things), to consciously remove a part of ones-self is an act of bringing bad luck into one's life; even the removal of moles is an act of disrespect into one's own creation.

So, following that logic, I could calculate when all the mayhem began; right after I cut off that fine roped hair of mine.  I'd been a dread-headed child for many moons, but any number of reasons had sent me to chop my hair off. The most auspicious of them was that I was moving back to New York, and that unto itself is a leviathan of a story.

What you may not have known, is that centuries--or was it decades?--ago, I had been a performing artist. In fact, my whole life was one extroverted path in creativity. I have never not known an imaginative moment, and if you think that's an exaggeration, please be aware you are reading the blog of a woman who has actively spent four years frolicking in NATURE and telling you strange stories about it.

But neither here nor there....

There was a secret, you see. Despite all of this hobbity-traveling, I had been holding one small dream in my heart, which was to return to my performing arts roots, and the place where it all started: New York City. In order to pursue these theatrical aspirations, thing must be done. Like cutting hair.  And returning to the place from which I had come.

It had started simply enough. I already had a bevvy of friends who were willing to help me, and it was a whole different track: I was vending, as I had this whole little soap and honey business. Initially, it was slick and sweet as sugar, but then all things seem sweet on a honeymoon.

New York, you see, has a way of slowly gnawing at you, and I had forgotten. I had forgotten I had run from here four years ago because of it's high-wheeling ransom, and it had gotten worse since my return. Her expense was far too high, and her payback was ludicrously low. Friends had hinted that making a living had been nothing short of staggering. I also could not justify the staunch level of consumerism, particularly with food; I had been amidst fine folk in the countryside, everywhere, where quality food was grown or bought at reasonable prices. To avoid the sweat and toil of good outdoor farm work, a New Yorker would pay into the nose-bleed section for food--three times the price almost everywhere else.

There also seemed little to do--all the fine sort of outdoor things I had been used to where now sandwiched between claustrophobic gray buildings, shared amongst millions of people cramped and annoyed onto a tiny island they called home.

The truth was, I had changed. This city was what it always had been and, to it's credit, for urban-philes, New York City was a fine mistress. But I had been everywhere else, seen kindness amongst strangers, gotten my hands literally and figuratively dirty working with people of the earth, found feasts in forests, laughed with people that the rest of the world would have cast off as too poor, too dumb, too weird, too unsophisticated....I'd been out there, and New York's high-end charm struck me as pretentious. The mistress was fine from afar but close up, she was a pricey and ungrateful trick.

I would have little time to think on such things, as a series of unfortunate events would befall me that would both throw me off of my game, and cement my resolve about many things. The first of these, with little surprise, is that my van tried to kill me, again. Ahh, you haven't heard of my killer green jalopy of a beast? This thing has tried---unsuccessfully, I'm happy to report--to bash me in on a few occasions. There would be no exceptions one day, in Brooklyn, when the blasted thing STOPPED IN THE MIDDLE OF THE INTERSECTION, mid-drive, while I was home some friends. We barely managed to push it to the other side of the street, but the ensuing scramble from the tow guys took FOUR hours, while waiting in the cold and praying that the throngs of oncoming traffic would not cause even further damage.

It blatantly occurred to me, then, that had I been anywhere else, the wait would likely be cut in half, but the throngs of people and people with cars in NYC was such that there was no choice but to bear out the ludicrous wait time. It would be that way with everything here: everything took an immense amount of time, or paperwork.

I would soon find this to be true about health insurance as well, and that was because, shortly after the instance with the wayward vehicle, the world starting spinning. Literally.

There was no inkling of it, really. I had gotten myself a bar-maid's job, and shortly thereafter, there were subtle signs of floating. That was the strange, un-anchored feeling I had once a day, for a couple of weeks. I had dismissed it as the general frazzled-side effects of city life.

But they soon became more pronounced, more frequent, sometimes two dozen times a day. There was no forewarning to these flare-ups: a never felt light-headed, dizzy, nauseous. I had no history of such a malady, so it became quite a mystery. It perhaps would have been faster and better solved, had not the fancy paperwork and red-tape of the health care been such a booby-trap, but that is a story better left unspoken.

Four months later, I had just begun a series of tests, but by then, my entire focus was blinded by fear.  It was far too frivolous to think of acting and creativity. Instead, my days were filled with dread, a maddening curiosity as to what was wrong with me, and a life that currently not under my control. I had already been humbled by other ideas of sickness and death. It was strange to think of my own in those terms, and it hastened the idea that I probably should leave this place, that had already been so difficult in so many ways.

Because those answers were not forthcoming in the unnaturally slow doctor's appointments, I decided to leave the city. This decision was hastened by the last of all insults that would happen while I was there: a friend whom I had been staying with, through no fault of her own, was forced to send me packing immediate. With a bit of luck and the grace of another friend, I managed to stay the course of my original trip. But there was no doubt--I had to leave.

But it was a bitter pill to swallow. I had nursed this strange childhood dream to perform, and I would be once and for all dropping it. Now what? At the same time, I realized that I was not happy in this place, and it seemed that being happy--or at least at peace--with ones self  on a daily level was more important than some strange version of success. Perhaps there would be performing elsewhere. And, I was so much more than this place. I had to remind that bruised 10 year old inner child that I was a published writer, and had been published for my beekeeping and art, too. I had been in films, and filmed so many interesting people and experienced a fine caravan of the best that this country had to offer. I had done SO many things and I simply knew that it made no sense to live in this place, where so much is put on the line, where friends are too busy hustling to survive, where people seem strangely disconnected, and hard choices had to be made on a daily basis.

A friend recently mentioned that, in this city "You can't too attached to anything, or anyone." I tried to think of what I would have done here in the long run. Could I have had a steady social life? Would I have met some fellow? Had a family? Even a dog?  The answers there were a resounding NO.  Everything was disposable in this place. Everything came with a price.

And so, I packed my suitcase. And my van. I had gone to get 10 years of my life back from this place, which so haunted me. I had been part of, and lost, a dance and theater troupe, a 10 year relationship, a beekeeping dream job. I had run because it was too much to bear anymore.

And I had gone on to have the most amazing journeys across this blessed country. So I should be gloating that I was exiting this place again.  And yet, I felt the strange twinge of bittersweet. Removed from its obligation, I remembered when I originally came here, full of energy, and I had given it gladly. I ran a theater and dance troupe. I had strolled through its parks and museums, and had lauded its diversity, and mourned for the death of that certain charm that had held sway on me.

But that bittersweet, it's just the beginning of the story. People, they will tell you things happen for a reason, and maybe I was never meant to be here. This short haired girl who may or may not believe in luck certainly believes that luck can be made. I will get into my killer van, with my fine stories, and will bring you along with me.

Now, more than ever,  there will be adventures.
Oh yes, there are always adventures around every corner.

I'm just glad I got to experience NYC with you! Here's hoping we get to frolic Atlanta together soon! Or to email some of Lil Mama's goodies in FL. You know, whatever. ;)