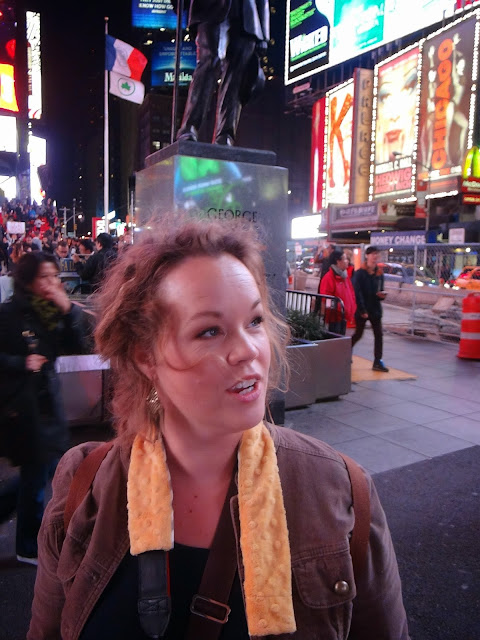 Magic is everywhere, even in the Big City.....

This is and this isn't a traveler's story. Sometimes, it's fine to see a tale through the eyes of another traveler--and that is how this journey goes.
Just when I had thrown my hands up in the air and given up on the Big Apple, a friend had come along--a visitor to this place that I once dared to call home--and given me a fresh perspective on this place.

The timing could not be more perfect. A day away from Halloween, I had felt the holiday blues; who could blame this Halloween fanatic, when I was in the middle of packing up to leave during the Halloween season instead of voraciously costuming like mad?

But instead, I would now be meeting a friend through the magic of the electronic interwebs--such is modern social calling. Jamie and I had known each other electronically, and had shared an interested in art, doll making, creativity, folk and fable. Though she was as kindly Southern as they come, she has a witty feist that is quite admirable. She also runs a business building and refurbishing furniture--for a city girl like myself that can barely use a hammer, I consider that a sassy career move, one to be respected.

Jamie had come as part of a separate company interview, and I had only stumbled upon her visit to the Big City coincidentally. She had always wanted to see New York, so it seemed a fine time to volunteer to be a tour guide.  Initially, I thought I would be helping a friend, but what I didn't realize was that such a gift would boomerang; I would find whimsy and admiration, once again, in a city that had broken my spirit.

I met this wild haired Southern gal (indeed, she has shared in the sisterhood of the dread) at Grand Central, and we spent our day on the West Side of the City, covering what seemed to be the standard wish list of things that most visitors of this concrete leviathan would want to see. But with cheerful chatter and sheer delight at everything she saw, I couldn't help but be buoyed by my friend's exuberance.

We first made our way to the New York Public Library near Bryant Park. This was where the pair of iconic lions "stood guard" outside. From my understanding, the library system was initially created through the funding of John Jacob Astor in the 1800's, and the particular branch (the main branch) where we visited was completed in 1911. The celebrity lions were created by sculptor E.C. Potter. 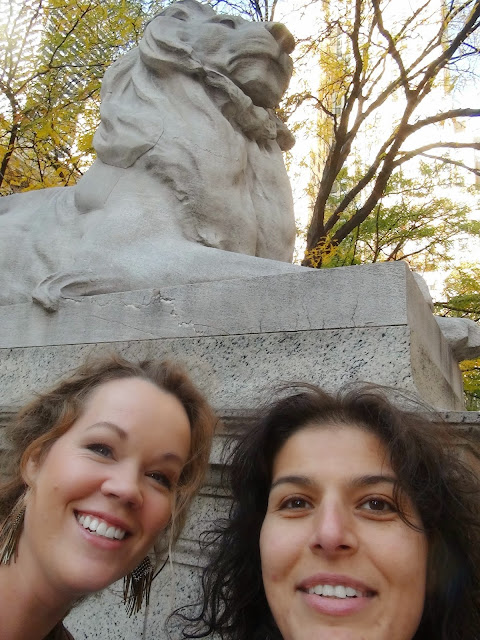 We then walked a bit further until I recognized the familiar alleyway to Rockefeller Center. And yes, even though it was a day before Halloween, people were already on the ice!

Technically, Rockefeller Center is a whole slew of buildings around the area, not just the famous rink which showcases the Christmas tree in December. The whole area was built up by John D. Rockefeller, and lasted from 1930-1939. The rink highlights a large gold hued statue of Prometheus (I always thought it was Apollo). Amongst other buildings included in the Rockefeller Center construction was Radio City Music Hall, which we also say. 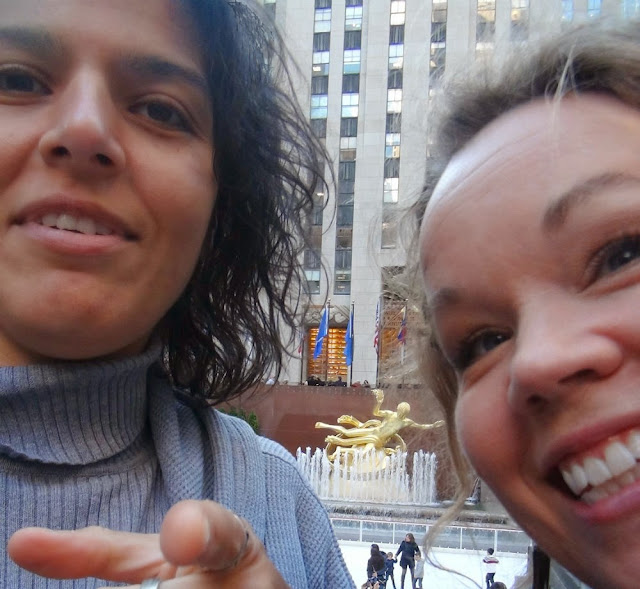 We also eventually ended up fulfilling our childhood fantasies by visiting FAO Schwarz. In reality, Jamie had two tykes at home who had begged her to see the place. I don't think it took any sort of arm-bending to process that request...soo...we were off!

To note, FAO Schwarz, which was founded in 1862 is the OLDEST Toy Store in America. Known initially as "Schwarz Toy Bazaar" by founder Frederick August Otto Schwarz and his brothers, this place got hopping once its giant floor piano was featured in the movie "Big." The place really IS enchanted. We passed a dizzying array of toys and moving dooh-dads up the stairs...where we ventured into the Lego section. 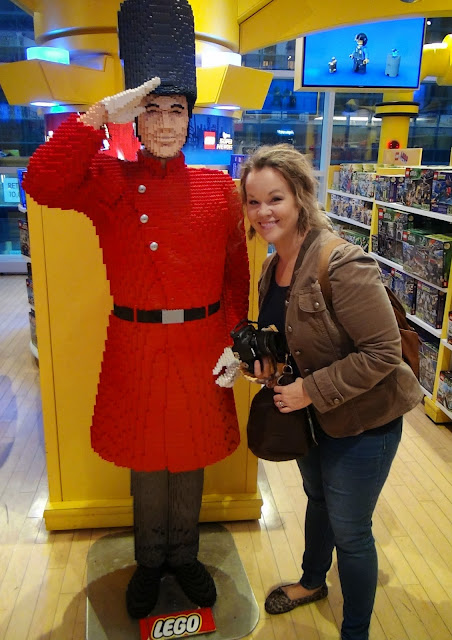 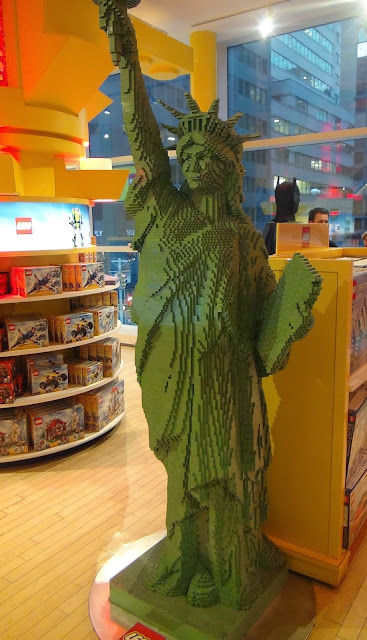 Jamie eventually nabbed a floor piano, herself, along with a few fine things. We even ventured into the "Willy Wonka" section, where giant versions of candy made my teeth hurt. 3 foot gummy bears sat alongside sheet-long Rice Krispies bars, and lollipops the size one's palms glistened temptingly.

After that fine and fancy adventure, we made our way out into the Fall evening. By now it was dark, but there was one more surprise in store--Times Square. That beauty would be all aglow in lights right now: serious wattage from a million moving billboards and advertisements made night seem like day. I had to bring Miss Jamie there, for all the spectacular shenanigans.
It didn't disappoint.... 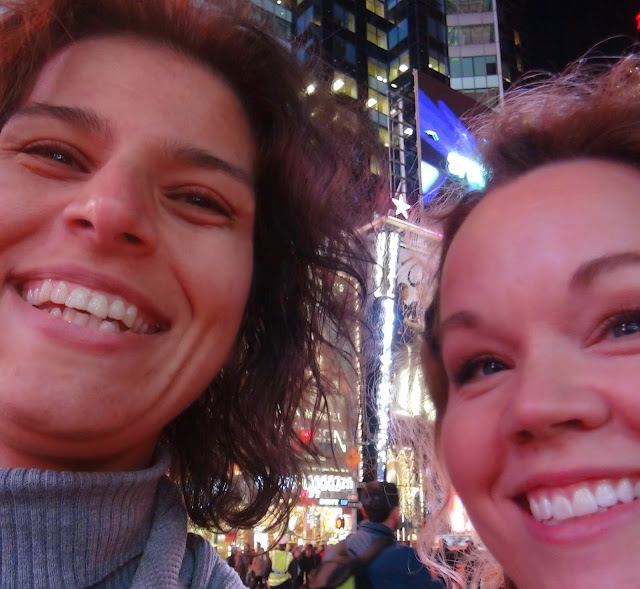 We also managed to swing down to the Broadway district, where familiar musicals mingled with the new openings. Familiar film and theater stars names lined the marquis: Matthew Broderick, Rupert Grint, Bradley Cooper, Cyndi Lauper. It was fun to read the names and admire the poster art.... 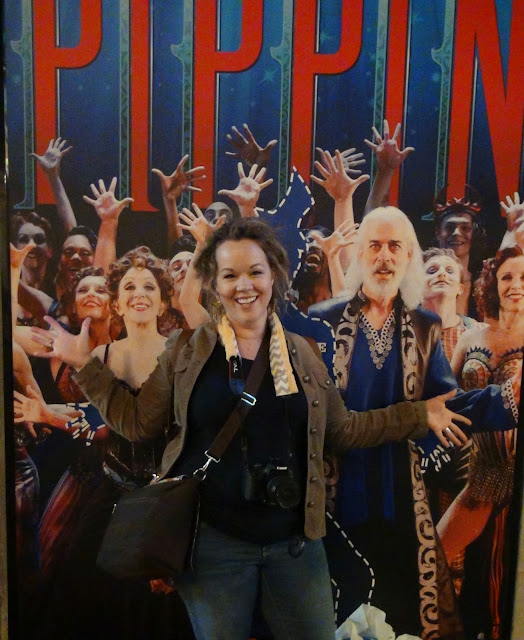 After I told Jamie she had a career in "jazz hands" we capped off the day at a true New York diner. This greasy spoon was full of comfort-food-favorites, at appropriately New Yawk prices.

Throughout it all, this lovely gal oohed and ahhed and told funny stories and made this tired old New Yorker smile.  I think my most humbling moment was in her plain delight at walking down THE SIDE of Central Park, at night, just looking at the carriage horses. In my mind, I kept puzzling why someone would be in love with going past a place they couldn't clearly see, but I then remembered how much I just loved driving past a golden country pasture--BECAUSE I COULD and BECAUSE I WAS THERE. And it was beautiful, anyway.

Indeed, we are all a lucky lot of travelers.
Thank you, Miss Jamie, for a fine time and a fit of NYC Smiles.

For more on the fabulous creations--and adventures--of my fine and free spirited friend, visit www.SouthernRevivals.com
Posted by Unknown at 4:30 PM