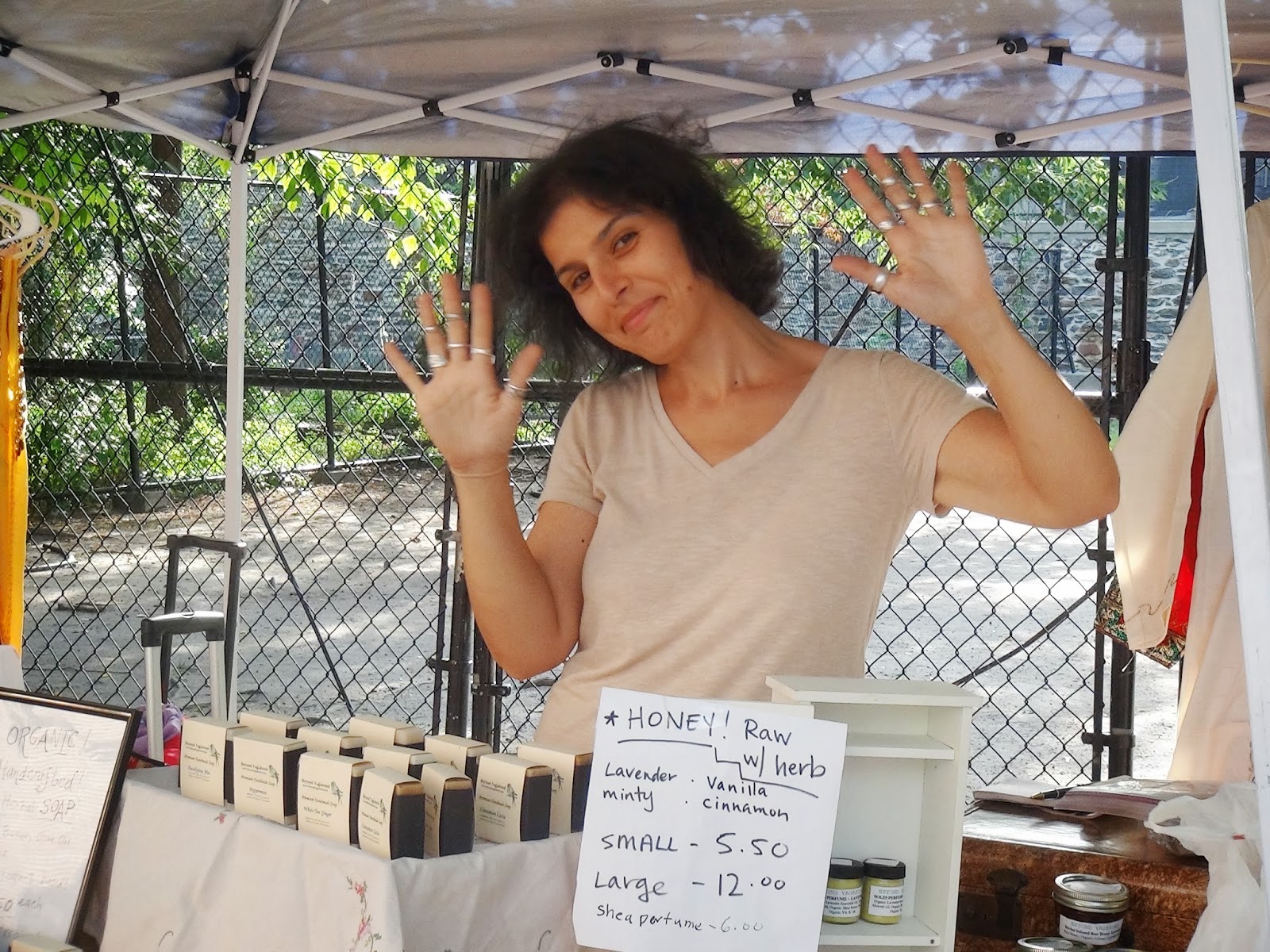 Somewhere between the exciting workshop moments of Springtide, and The Birthday Wish, there was a whole slew of madness happening in Summertime.  That unfortunate step-child of the seasons is oft-ignored not so much out of malice, but because THE OUTSIDE WORLD was calling and....well...the OUTSIDE world that sings to travelers such as myself writing INSIDE never seem to mix well. When you are the wandering, farming sort, outside is THE place to be.

So now I will tell you that tale of the hearty Summer quarter, as part of a journey that lead me to places even I never expected to take.....

New York is the name of the game, Friends. I had returned to The Leviathan for purely selfish reasons, to be fair: booted away from various writing dream jobs, and not satisfied taking a simple paper pushing or cashiers mettle, I returned to the heart of it all, trying to suss out my first love: performing arts. I left this place long ago, chagrin and broken-hearted at a city that seemed unyielding.

This journey was somewhat different, though. I had come with a van-full of pretty things, soaps and honey and clocks and other sundries of whimsical charm. I still had fun and helpful friends all around, too, and they got me into a circus-sized heap of vending venues and other shenanigans that were fine and varied as a country fair.

And so the Summer went this way,  for a spell: meeting other vendors and carousing with good old friends, and meeting new, interesting, and creative people through vending circuits. As was wont of me, I also organized a few of these events, as well!

Heck, we even had a few professional photographers come by and take photos!


The fun initially began with my backstory creative friends: belly dance and creative colleagues Karen and Debbie, who also vended all around New York and New Jersey helped me join the vending bandwagon!
Here, I'm in NJ for Woofstock, where proceeds to to furry friends--a double win, in my book! 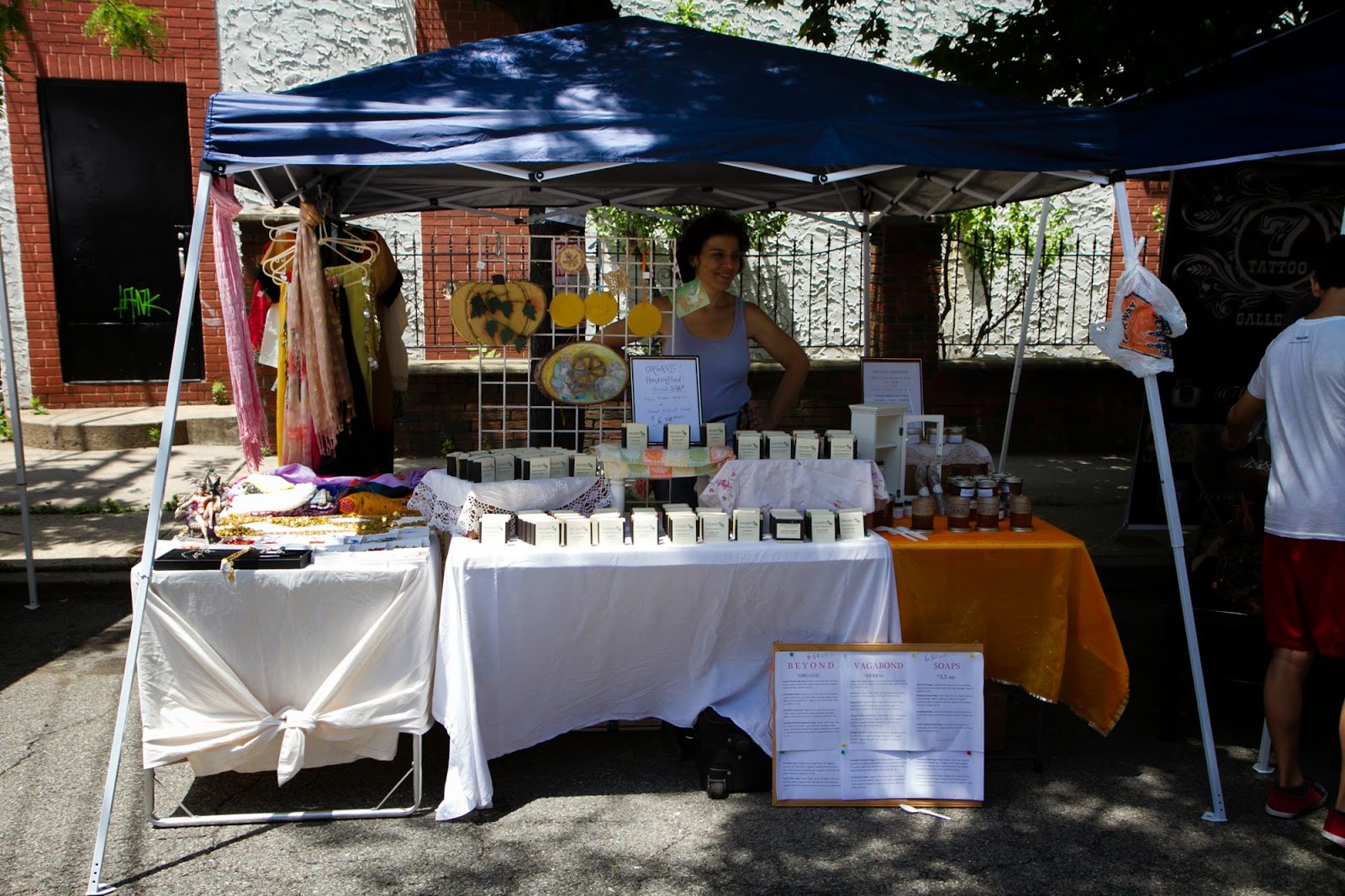 Check out those lovely Beyond Vagabond organic soaps! 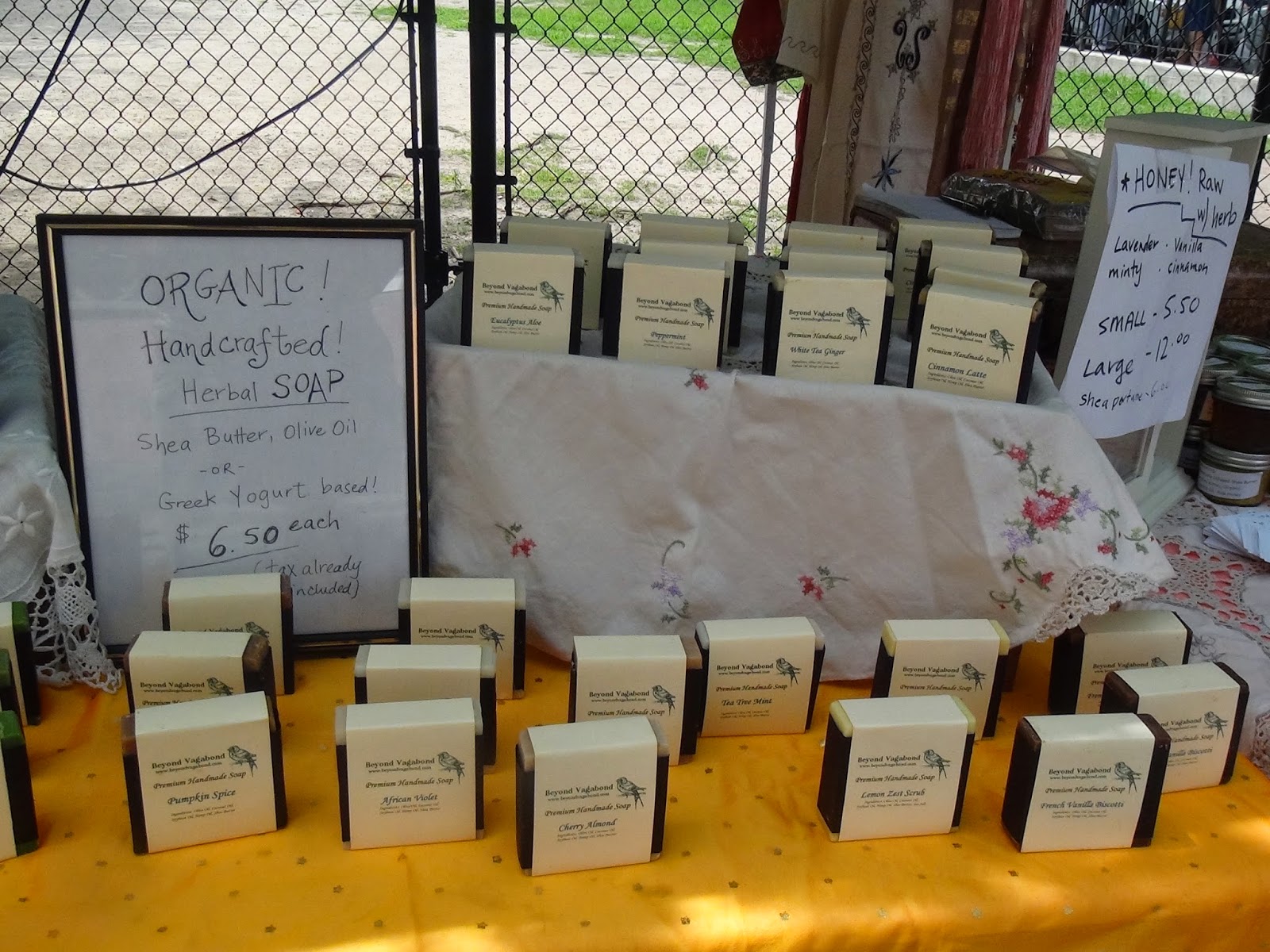 Next, it was off to NYC, to help create a large open marketplace in a schoolyard... 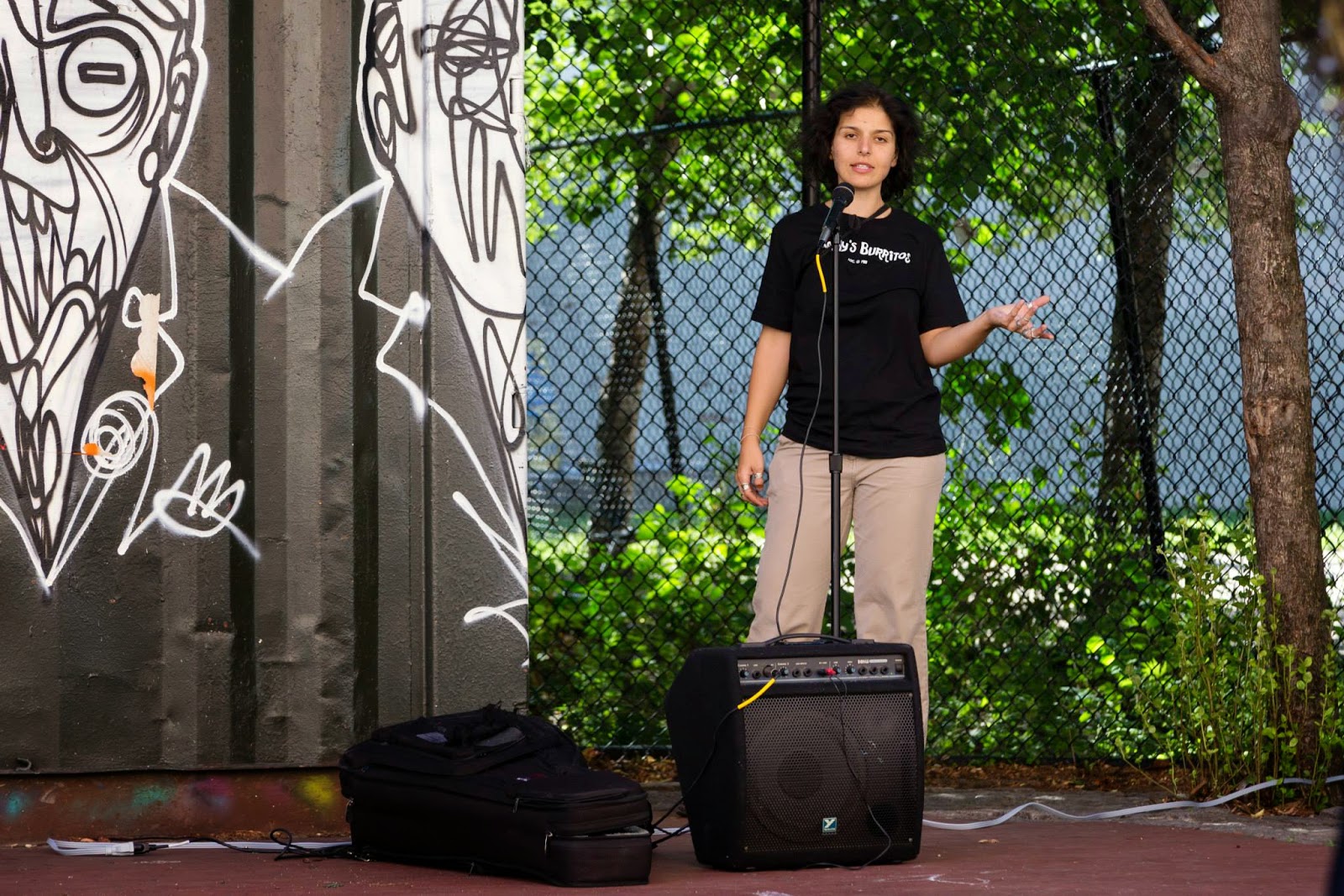 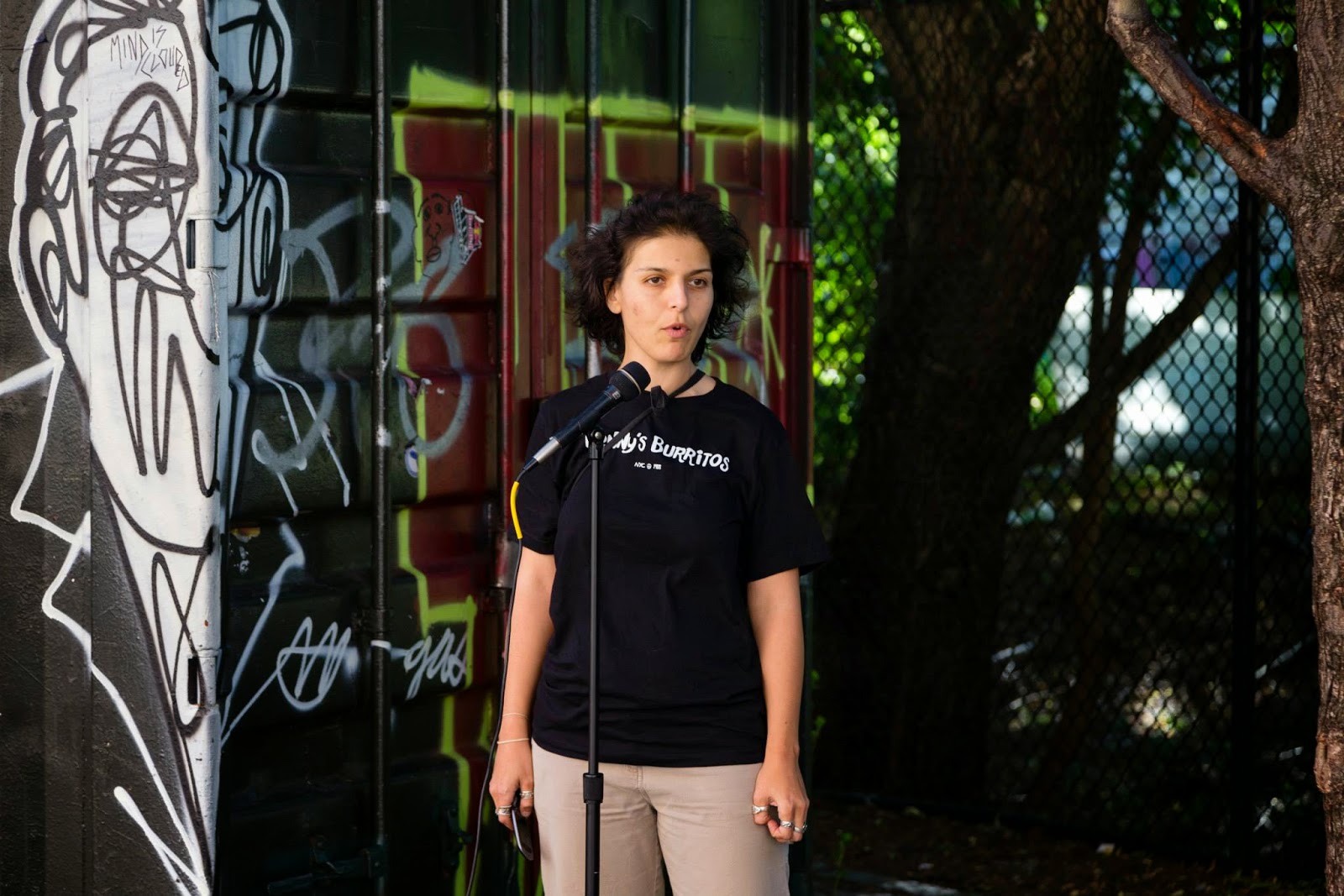 I was lucky enough to meet Mo and fellow photogs Geo Gellar, wandering and creative spirits like myself. Whilst not sure how they caught wind of our funny little gypsy event, I was glad to know them: apparently, they shoot NYC street art, and Geo films the interesting people of New York, as well.
They are free thinkers and wizened spirits, and it was quite a treat to meet them.

Geo and I in conversation 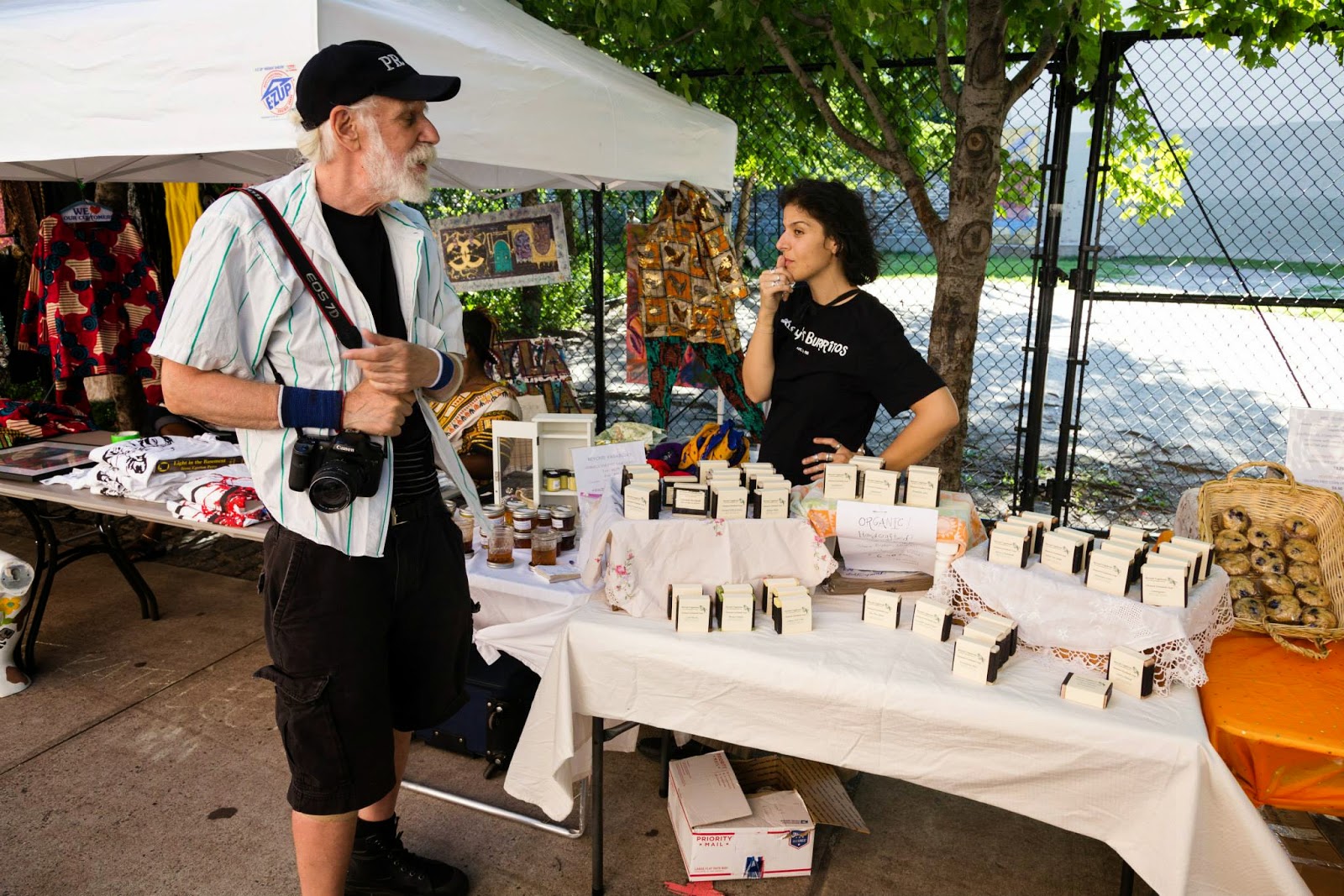 Beyond that, the festivals were quite the hootenanny of arts, crafts, and fabulous fun faire....

Starr, organizer of the outdoor festival (L) and Karyn, my vending friend (R) 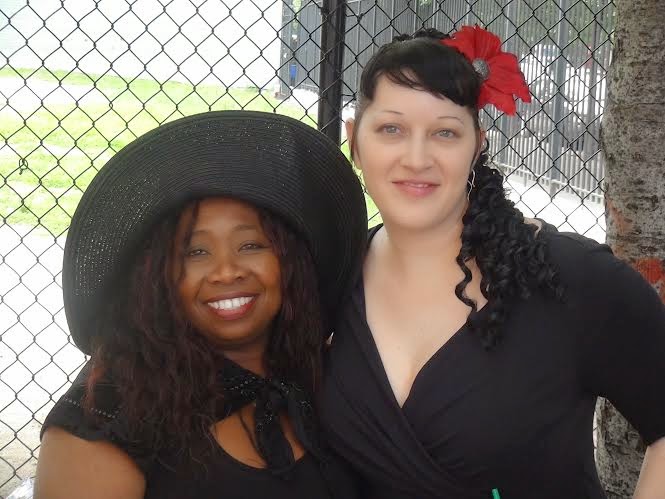 African clothing designers with Nyla (L), a fabulous young singer at the festival.... 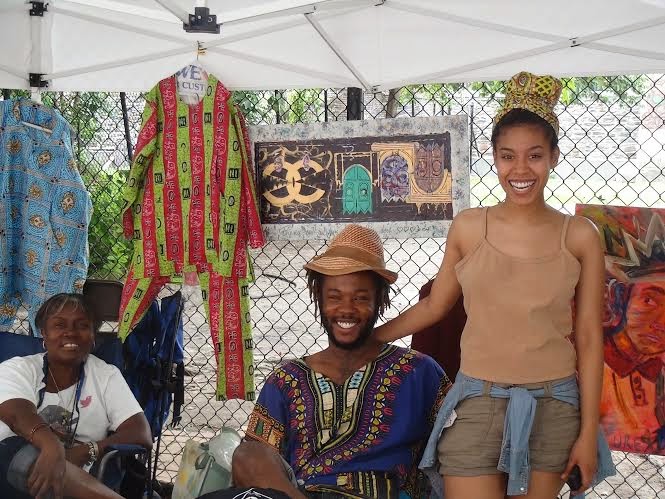 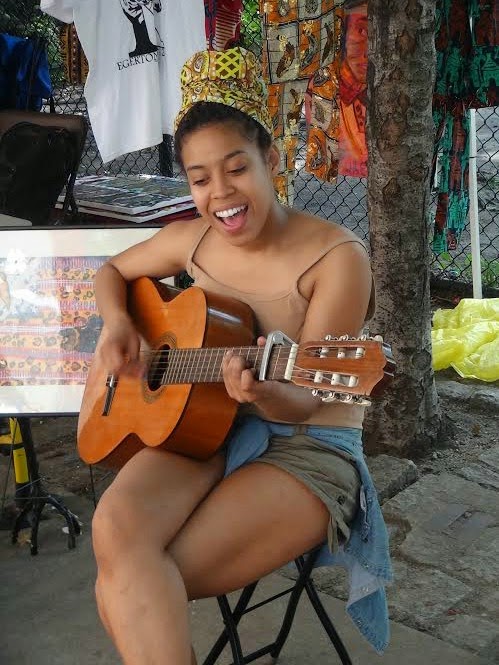 And so, the Summer went. Beyond this, there were fabulous reunions with the gaggle of my New York City friends...dancers, writers, and general merry-makers that I had missed or forgotten I missed. It was pure bliss, indeed.


Suzanne, my former dance troupe-mate, was visiting herself--she'd moved to Arizona, but we were lucky enough to see each other! 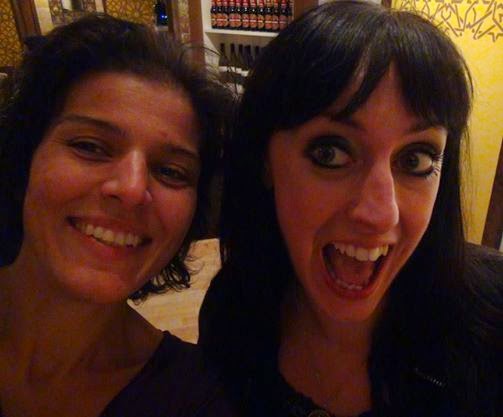 Former dancer/actress for my troupe, Liz and dance aficionado and professor, Frank and I ham it up for the camera! 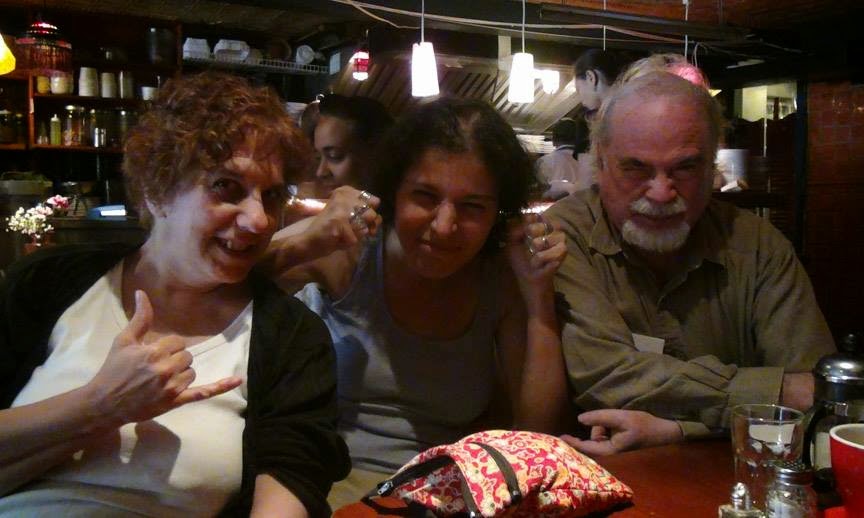 I have many lovely ladies as friends (thank you Barb, Nancy, and Pam)! 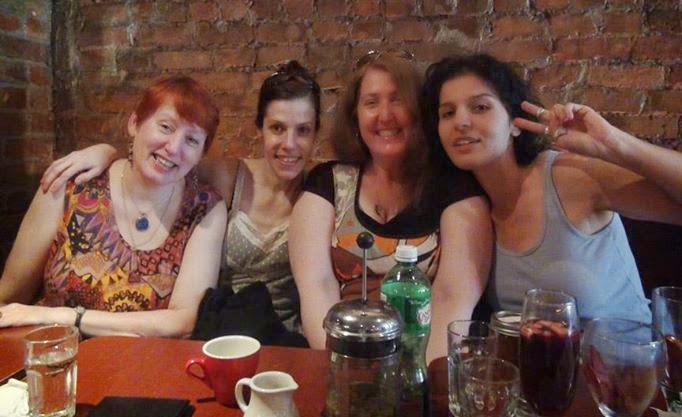 I realized though, one thing was missing: try as I might to muster up enough chutzpah for the performing arts and such, I had no heart to pummel my way through a strange world of acting fair...a land for the young and pretty and oft-narcissistic. I loved acting, I loved writing--heck, I've even directed a dance troupe--but I had found it quite maddening to navigate that tightly wound short-sighted world. I wasn't sure if it was with the passage of time, and so many glorious, grandiose, or heart-rending events, but my interest in performing seemed more subdued somehow. Certainly, I loved the art of creating art, but the politics of it dissuaded me; I was more interested in trying to create pieces and reach people based on talent. But everyone was telling me, more than ever, I was looking at a business that was more and more mired in appearances. I had just been gone for three years meeting spirited people from all walks of life doing amazing and ingenious things in wide open swaths of land. These people were genuine, honest, hardworking people not willing to sit on their laurels and expect some notion of beauty to be their calling card. And so coming back to a swanked out city in which normal conversations revolved around what was HIP, TRENDY, COOL, just left me blinking my eyes.

Sure, those people have a right to their opinions, it just simply wasn't mine, and I suddenly wasn't quite sure how to negotiate the childhood dream to the practical day-to-day living in a place so utterly foreign to me, I couldn't make heads-or-tails of it.

In the meantime, in order to keep my sense of spirit, I was making things...beautiful things, that I wanted to send to new homes: 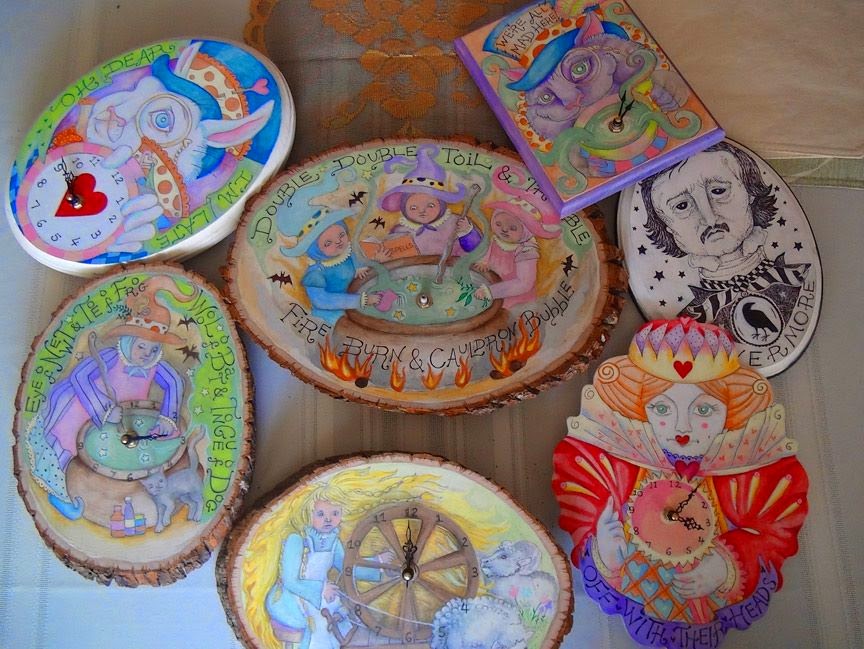 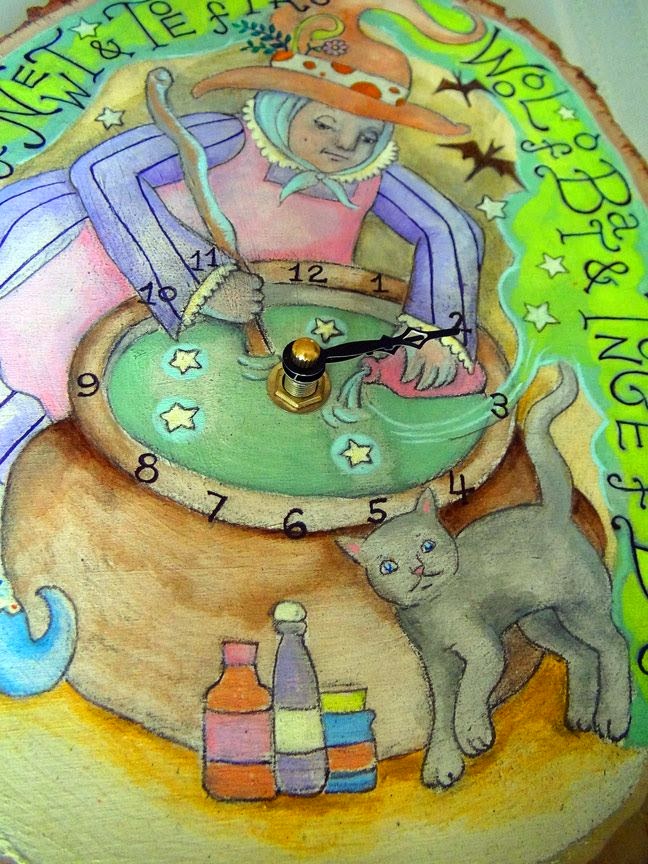 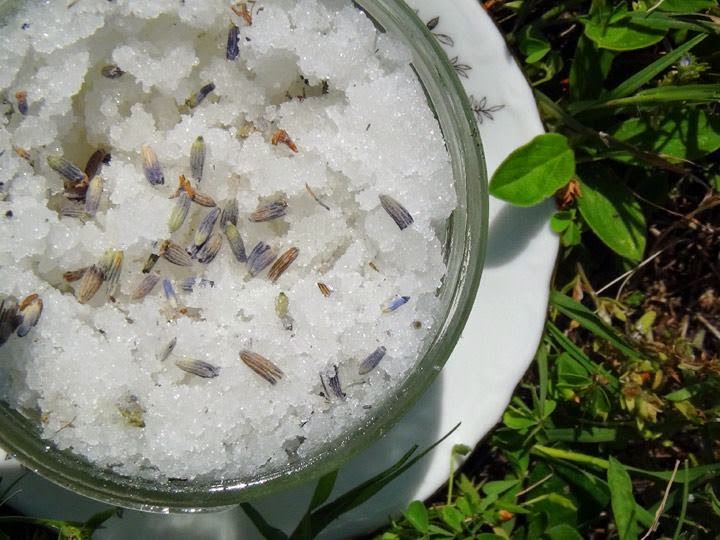 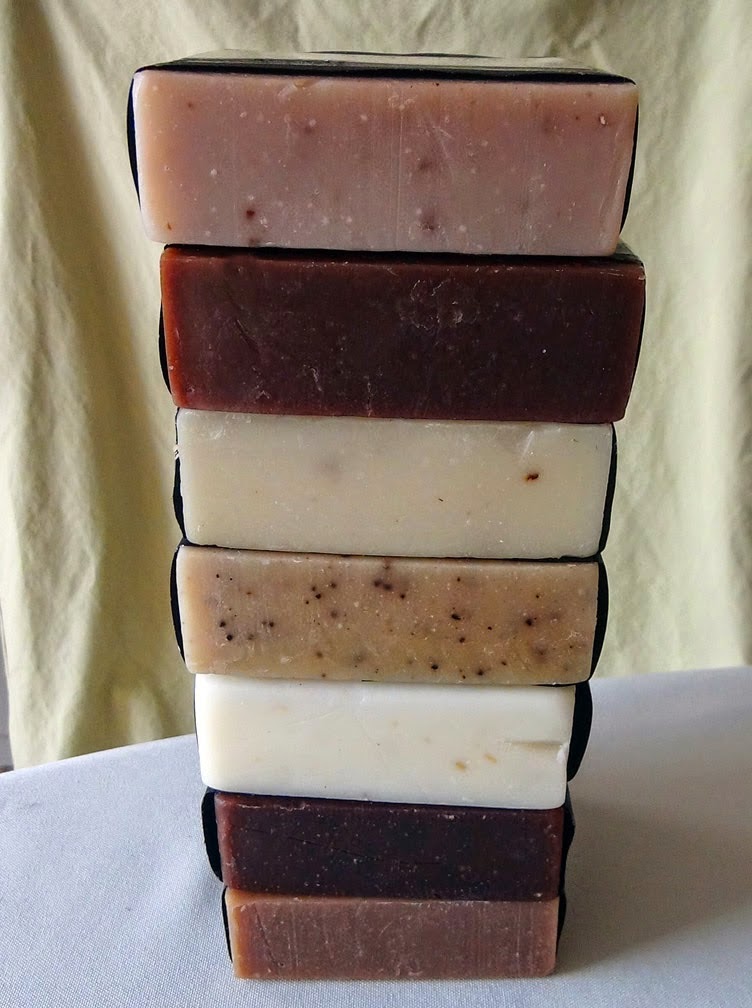 I was also contemplating new videos and new adventures...even books. I held a short and somewhat successful little fundraiser to get a book of all my adventures published, and which left me humble and big-hearted at all the love coming from friends and strangers alike.

But I was confused. What was I supposed to be doing? My heart belonged to performing and to an olden way of living. How does one merge that seamlessly? Was I doing to much, too little?

And there would be other things to consider, too...within a month of returning to the city, I would start having strange symptoms, sudden wobbly-wooziness that sprang, seemingly overnight, out of nowhere. This vertigo-ishness would change things....as would a trip to Connecticut, and other strange winding stories...

And those stories shall be forthcoming soon....
Posted by Unknown at 12:46 PM