Of Bees and Antlers 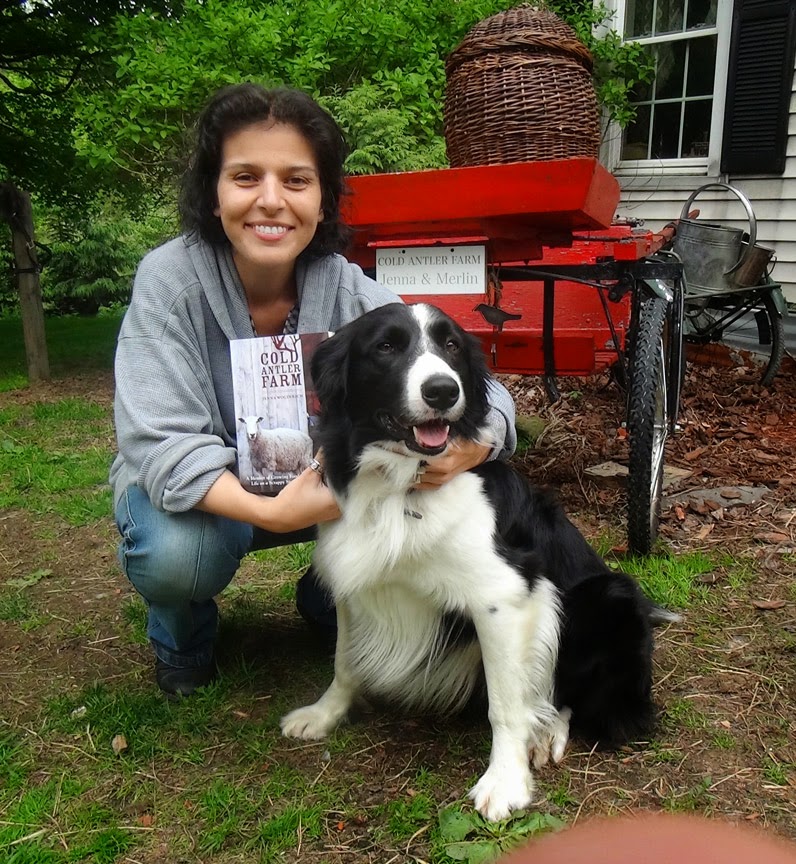 Hanging out with Gibson. His misstress wrote the fine book I'm holding.
For more on Jenna's writing, check out Cold Antler Farm!Photo by: Jenna Wogonrich


So here I was, on the road again. With over a week under my belt since I got back from my grand New Jersey excursions, I had saddled up my wayward van, and we were gulping down long stretches of black tar pavement, gallivanting three hours north of New York City.

I was there on another mission, you see. This one was to see a gal about her farm and her bees, and to impart a little third generation beekeeping for those coming to her farm, to see me. Don't be fooled though, in many ways, I was coming to see HER. Heck, many people were. See, this wasn't just any other farmer and this was no typical sojourn...nope. This was a visit to the farm of Jenna Wogonrich, of Cold Antler Farm, who possibly single-handedly made farming cool for the young (and old) folk.

Nearly a decade ago, ripe with old age in her early twenties, she graduated college with a graphic design degree and then decided to blow everyone's mind by deciding to make farming a main focus of her life. Actually, the more I learn of her, the more I realize that it is the love for the old ways and adopting those ideas and ideals as a lifestyle, that she has embraced. Nevertheless, in an era before self-sustainability became the buzzword of the day, when most young people considered farming dirty and useless work, this woman got herself some land, and then wrote about her adventures with words so fine and clever, you would mistake them for sonnets, high compositions, masterpieces.

Plus, all the information she imparted, wrapped in fine description and tooth-cut with hands-on experience, helped start a small geyser of new interest in back-to-the-land love, even if that love was in window-silled pots in urban apartments.

Natch, the girl wrote so well that she soon followed her online adventures with the real thing; she's got five books (or more? I've lost count) to her name, each imparting a different hue of life on a farm. It's a fine accomplishment.

For all that, or perhaps because of it, she's a humble and down to earth (literally and figuratively) soul. My first encounter with the gal was when I interviewed her for my farm show a few years back: yes, that farming thing runs pretty deep 'round my neck of the woods. She was direct and no frills, and clearly passionate about what she did.

In many ways, it would be no different this time 'round, either. Her farm is found three hours outside of New York City. It was a beautiful drive--in many ways like the one I had always taken on these jaunts, but always flavored slightly differently by where I am. The Northeast holds a particularly hard grip in my heart. I suppose it's that way for many people. The rolling of the hills, the vibrant tree colors, the glimpse of farmstock all along the way...that is my heaven. Having left at an obscenely early hour, I enjoy sunrise, and the quiet of the country roads. Jenna's farm is smack atop a mountain. The farm house is utterly charming, and the outside jigs with sheep, dogs, goats, fowl, and a wiry pony and majestic black Fell pony. It seems like a typical, if staid farm scene, right? But you will be shocked, as you walk around back, to see a falcon perched outside. Yeah, Miss Jenna's a falconer. She also is an archer, fiddler, beekeeper, singer of old songs and keeper of traditions. Typical thinking, it doesn't work around here.

She walks out, all smiles and gusto. She is friendly, and direct, and without any guile. She takes me to the inside of her house, which I love: it's brim-ful of old antiques that are used in utilitarian style. An old steamer trunk is a table, vintage farm dishware is still used. I am offered cool water from a mason jar, and stare at wall hangings that are a mix of antique farm signage and Celtic paraphernalia.

I smile. I may have finally met my match, level 10, for antique love and traditions keeping.

Her house is old-time mountain décor meets 18th century farmhouse, and she moves through it in a purposeful flurry. That's farming for you--you never really do stand still. At some point, I got a sense that she was sort of apologizing for the way it looked, but I scoff at that. I consider her life an enviable one; there are at least a dozen stories I could tell her of friends who live in tiny hovels with jobs that make them cry every morning. I just left those friends three hours ago. Plus, having traveled to so many different farms and done farming has made my perspective such that you can really sense the grit of the farmer, and this farm is all heart.

By and by, our class participants arrived. There were Kathy and Mary from Albany, Darcie from Massachusetts, and Holly and Ruth a mother-daughter team. Soon enough, I was imparting the knowledge and stories about my grandfather's beekeeping, the same story I'd been teaching in Iowa, Illinois, Kansas, New York, New Jersey, Pennsylvania, and Florida. My audience was a fun group who jumped in with their own stories and questions. We spent several hours like this, even goofing off right before lunch break. 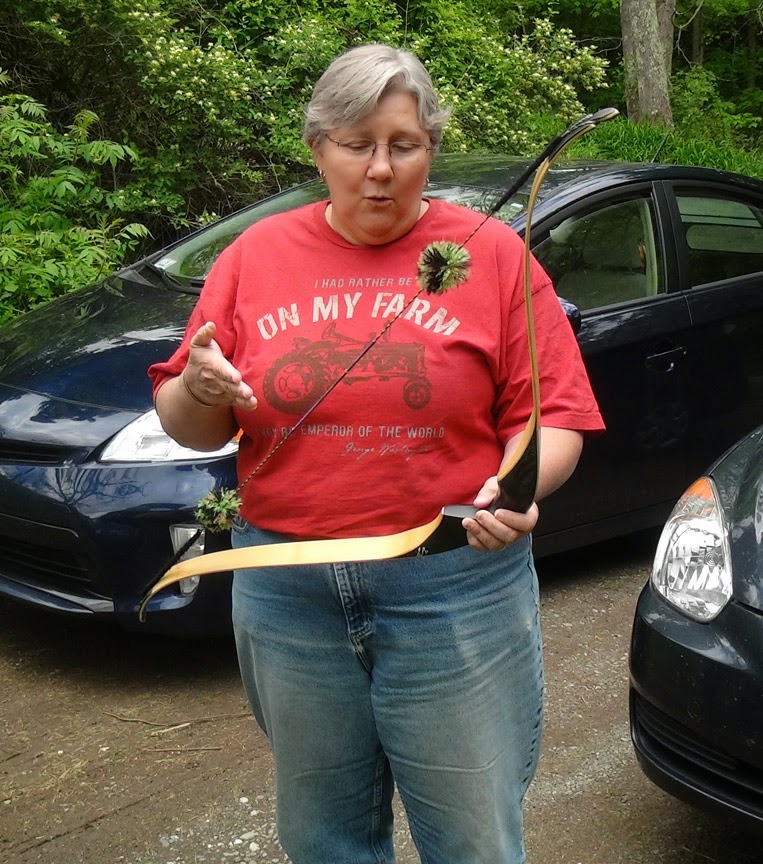 And so it went--beekeeping basics were dispensed, and a cauldron-full of ancient bee lore, for good measure. There was one refreshingly off-script moment where Mary, who was facing the porch's windowed door, pointed out to Jenna that her sheep had actually managed to escape the fencing and were headed across the road! In true farmer form, Jenna simply got up and tended to them, while we carried on with the class. That's just farming, folks!

In bouts, Jenna also showed us her sheep, we did go look at her hive, we met her equines-- Jasper the smaller Pony Of The Americas, and the magical Merlin, the black Fell pony.


There were chicken, turkeys and geese. There was Bonita the milking goat and her daughter. There were two pigs in the barn, and greens in the garden. Italics is the name of her Red-Tailed Hawk, a well mannered juvenile. She explained her use for all of them, and it was magical.

This little ewe was a bottle lamb, and the daughter of Maude the Angry Ewe, from Jenna's original flock... 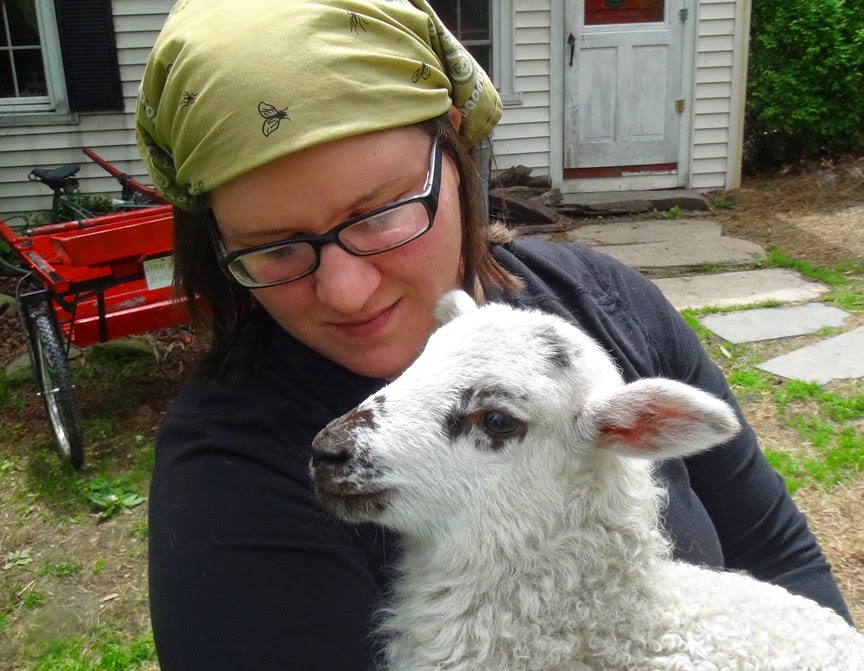 Bonita and her daughter. 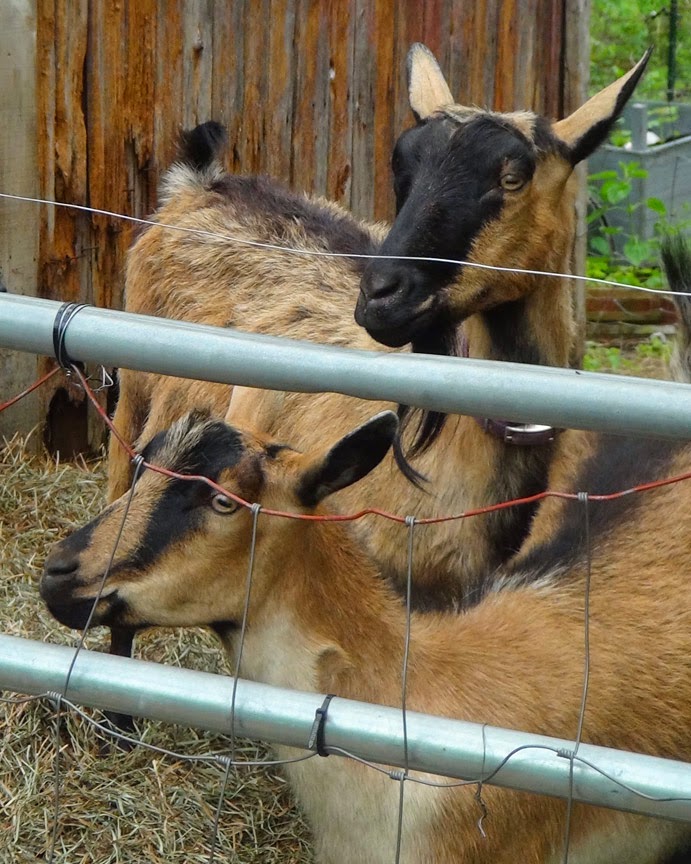 Soon enough it was time to go. I would be whisked off to the neighboring farm called Common Sense to spend the night, and already it was too short a stay.

At the end, I asked Jenna to kindly take a picture with her leading man. He had salt and pepper hair, in a way, and was full of energy and a great big smile. It was her border collie and partner-in-crime, Gibson. This fellow was quite the showman and ambassador for Cold Antler, rounding our feet all the while. As you can see by the photogenic outcome in the pic at the top of this story, he might well be a model in the making, though I'm sure Jenna would scoff at her sheepherding partner's would-be career change.

In the end, I made a whole gaggle of new friends. 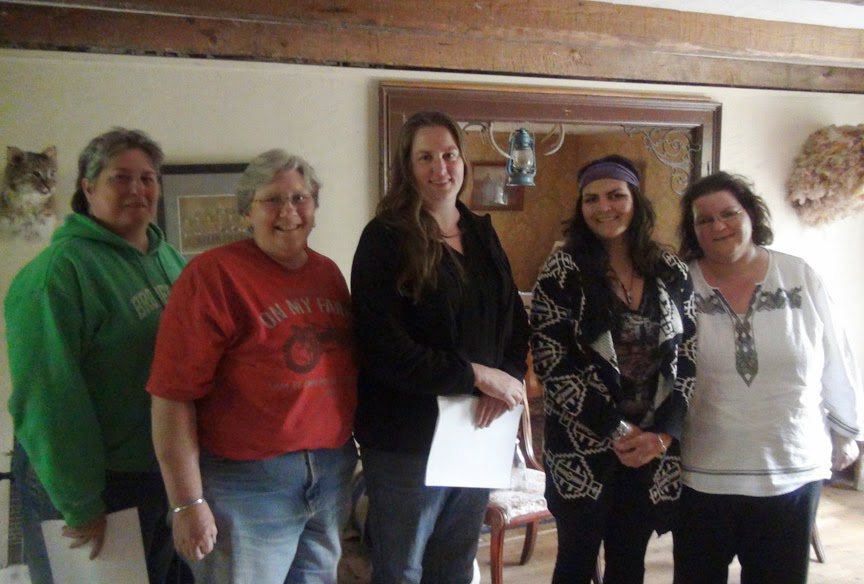 Heck, I was so enthralled I actually asked for real estate brochures. Did I mention I loved the Northeast? And farming? Ehh, maybe one of these days. At the very least, it would be cool to get some more Cold Antler in my life. You should, too!

lovely article. you are a gifted writer my dear. felt like i was there. xo, frannie

Great article. It felt like I was on the trip with you.