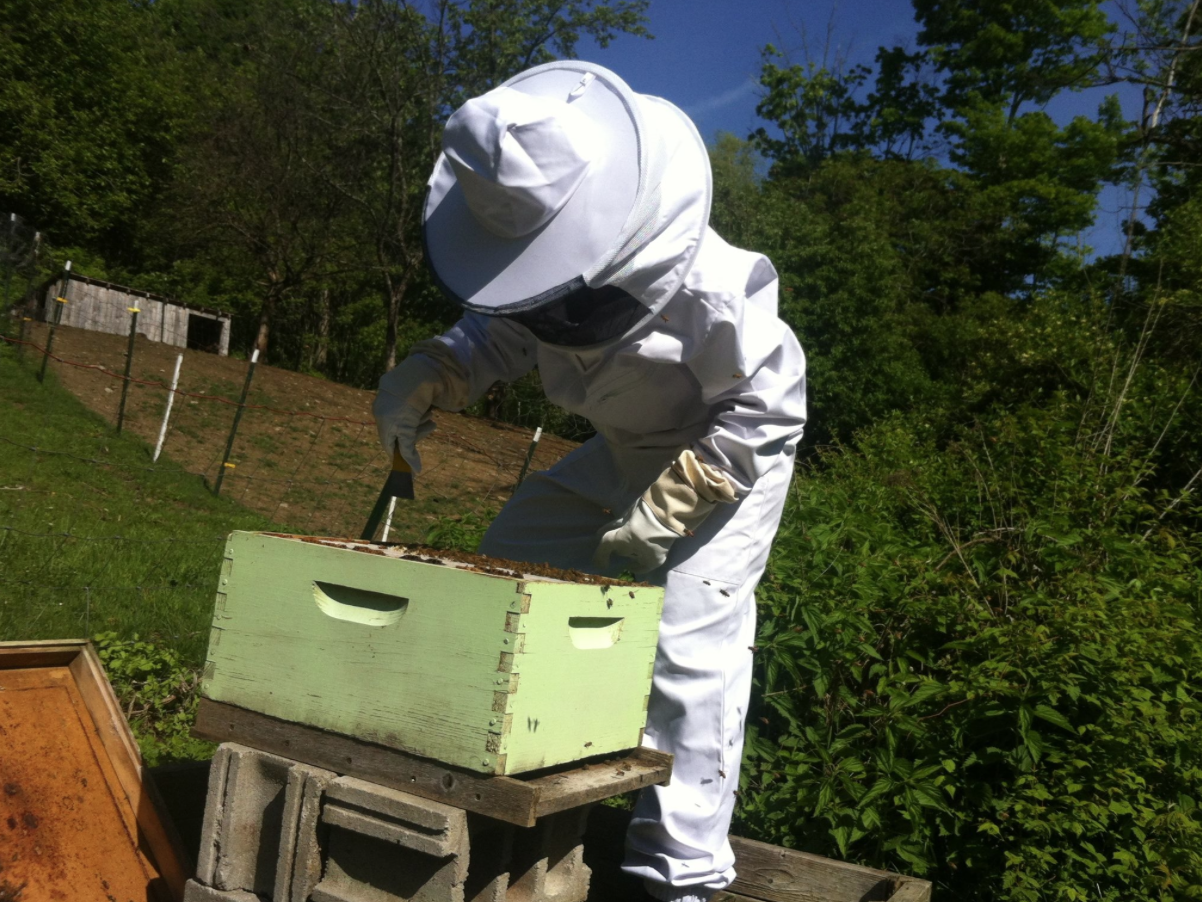 Photo by Jenna Wogonrich
Find More of HER version of this story by scrolling to the end of her fabulous chronicles, HERE

I had just finished up an exciting trip and discussion about bees, you see. I was at the home of noted farm author Jenna Wogonrich, and the place was a small, charming village of animal and plant citizenry, a cohesive village of livestock and farm buildings and hay and manure and offspring and the hum of work and life.

I had been teaching beekeeping classes there, and it was a hoot. I had met six new, cool, farm friends, and I was about to meet a whole new group too. See, I had planned to stay at Common Sense Farm, just down the road from Jenna. After a small reprieve getting homemade icecream from the local Stewart's (which, in my estimation, was akin to the NYC Starbucks or the Philly Wawa) and after eating a ridiculous three-scoop-advertised-as-one-scoop gigantic mound of it (man, was it tasty), we headed off to the farm.

That place, sometimes called a commune, was a massive thing on about 200 acres of land. It housed about 90 people who had come to build an intentional community raising animals and making soap. Othniel and his wife Yeshiva seemed to be the go-to people of the farm, which still was beautifully old-fashioned, but clearly not small. There were chickens, ducks, goats, peacocks, even donkeys.  Someone had even found a baby deer, apparently abandoned by its mother, and were feeding her goats milk, which was supposedly gentle on the stomach. There were bees in top bar hives. There were plenty of children running around. Mostly there was kindness and politeness and, indeed, a sense of community.

I lived off of that generosity, eating good food that no one would accept money for, meeting a young girl from France who was traveling through the Americas by herself, and then an older woman, who appeared to need the farm for solace. I spoke with the beekeeper, Andre, a bearded, wizened looking man, who was as eager to hear from me, as I was to hear from him. It was a fine exchange, indeed.

The next day, I awoke and was ready--lock, stock, and barrel--to roll out by 9 AM. I cruised the town a bit, before I thought to head over to Jenna's. I'd honestly just gone to say a humble goodbye and purchase her farm fresh eggs (support a small farmer!), but once I got their, it was decided that I should check her hives to make sure her newly minted colony had released their queen properly.

This was nothing new. I'd done this for our own hives, waaaaay back when I was tending to bees on a city rooftop--the same sort of stuff that managed to get us into a film. New packages of bees come with their queen secured in a small box. The box is lowered into the new hive. One end should have a candy shell, and the bees eat through this until the hole at the end is exposed, and the queen moves through it. This should usually take about 4 day. However, if the candy is too hard, too big, or some other mishap occurs, then the queen cannot be released, and if she stays there too long, she could starve. So, it's always good for the beekeeper to suit up to check that things were going smoothly.

I donned the outfit that I had for such an occasion, and used the good tools to make my way into the hive. Jenna, meanwhile, had been working on her new bed of spring greens right next to me, and right up behind us, closer to the curving mountainside property, were her two horses, Jasper and Merlin, nickering their approval.

The day was beautiful, brilliant hued blue-skied and cloudless, The Perfect Day. I could hear chickens gallivanting in the background. Even with the hive wide open, there was nothing to worry about. I hadn't worked a hive in a couple of years, but it's sort of like riding a bicycle, I suppose. I'm not a big advocate of smoking a hive, so I simply blew them out of my work path. I saw the box easily enough, the bees had pretty much combed around the thing so that it sat right at the top of the frame, in easy view. It took a few tries, slowly, with my hive tool, to pry the thing loose, but once I did, I found the box utterly empty. I smiled and thought "All Hail The Queen."

"You are so CALM," Jenna exclaimed. Of course. You can't teach it in beekeeping 101 and not live it. At that exact moment I wondered what my European grandfather, the one who started this whole beekeeping thing in my family, would think of this. He would have no idea, in his lifetime, that eventually would come back around to this way of living. I smiled.

The farm, at this moment, looked the way romantic visions do. The wayward girl runs feral, lives her own life, owns this wonderful house, these animals. It's something out of a postcard. And seeing Jenna toil quietly, contentedly, one gets a very simple notion, too. Don't be fooled. It's hard work and it will break your heart sometimes...even in my limited visits with women and men such as she, I know the grit under the silken veneer. The things farmers must go through to get food on the table is something we conveniently take for granted.

And the beekeepers, too.

I'll miss this place--I've still got to meet a small society I missed this trip around; it's definitely an excuse to come back 'round, I don't mind courting this place some more, in the future. That is, if they'll have a wayward writer-artist-beekeeper type in their midst.

TOMORROW: NEW YORK CITY--THE LEVIATHAN :)
Posted by Unknown at 7:43 AM

Thanks so much, Miss Frannie! Hugs to you!