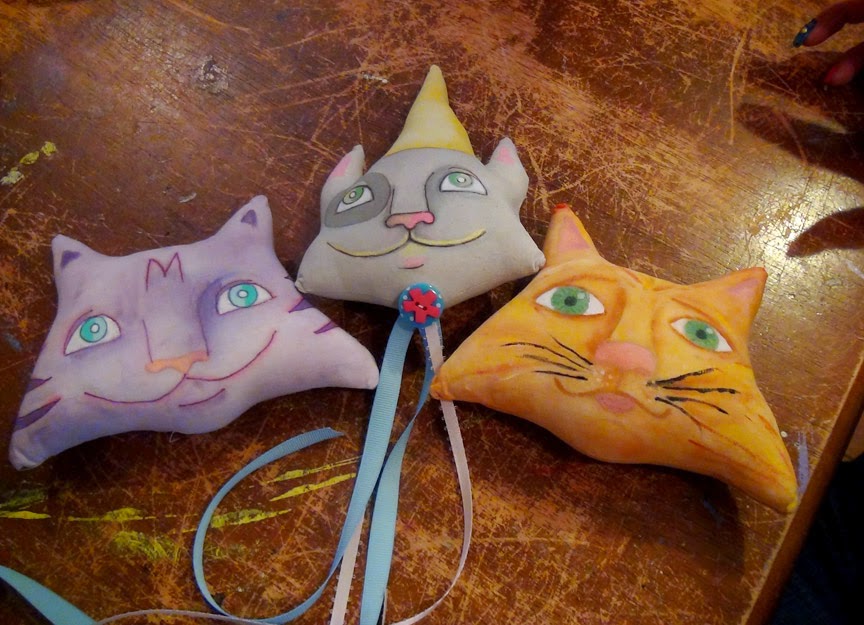 It had been pouring rain, on the second day of my trip to New Jersey. Indeed, it had been a long, strange, almost dangerous trip until this point, though it had also shown glimmers of being stunningly beautiful as well.

The rain did not dampen my mood--there was much to do and see in this enchanted little town where I was staying, and its people were wonderful characters, as well. This place, as with most small towns, boasted a close knit group of people. Holly Doyle, my hostess, might as well have been the unofficial Mayor of the place: she either stopped, or was stopped by, everyone in the street. She knew everyone, it seemed, and always had a funny or kind thing to say about them.

Many of the class attendants were such friends, or had been a part of one of the other prolific classes that were offered up at Jersey Made, the wonderful store and art space that Holly owned. In that little shop, surrounded by whimsical, wonderful, and clever items handmade by Jersey residents, those little classes chugged along, with strange and fun touches for the next few days as part of my stay.

My first night was spent teaching "Outside Of The Box Living." It was a study on how to live outside the conventional norms. As dubious as that may sound, there are actually techniques to living the life you want, away from corporate jobs, nine-to-five schedules, big house payments, and general forms of this form of strange, "capitalist slavery."  I was heartened to see a young lady, not yet out of high school, another traveling type, and an older woman show interest in this class. Really, there are many ways to be clever and creative in one's way of life. I hoped they'd walked away with some form of cool new way of seeing life, and I was humbled they had managed to come out to see me on my first day of teaching classes...


The next day was a bit of celebration, as my class was to be held on the same day as that of a planned exhibition car show, set to headline the middle of the town. To prepare, Holly gathered up several fellow shop owners and had helium balloons posted at the front of each shop. The inside of her store suddenly became a large, festive, showroom....


Lovely balloons color up the ceiling... 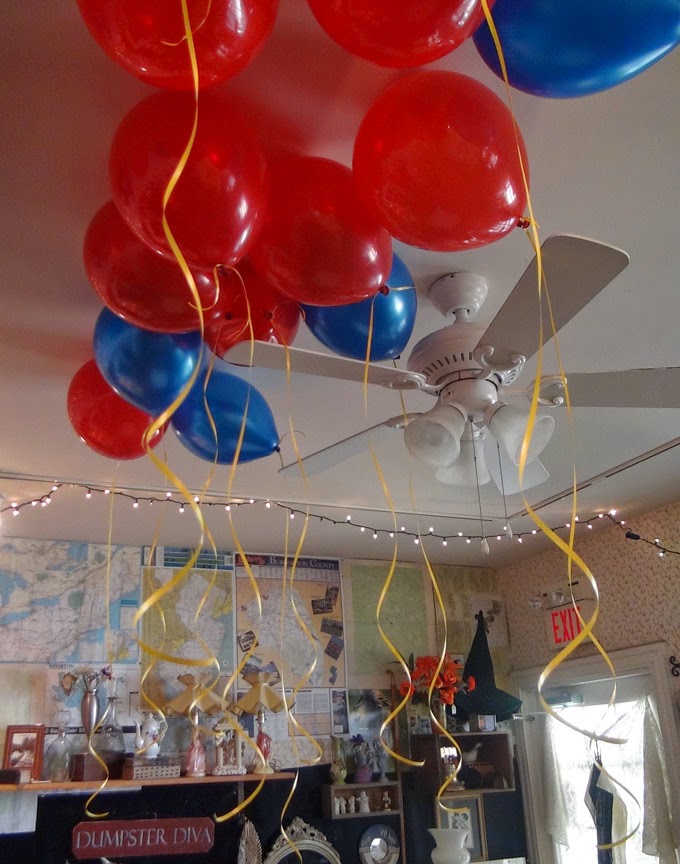 A bevvy of attendants help with balloon decor...bck (l-r): Mary of Pinelands Folk Music and Basketry Center and Rachel, a local and one of my class attendees.
Front: Tess of Earth Angels shop, and Holly my host. 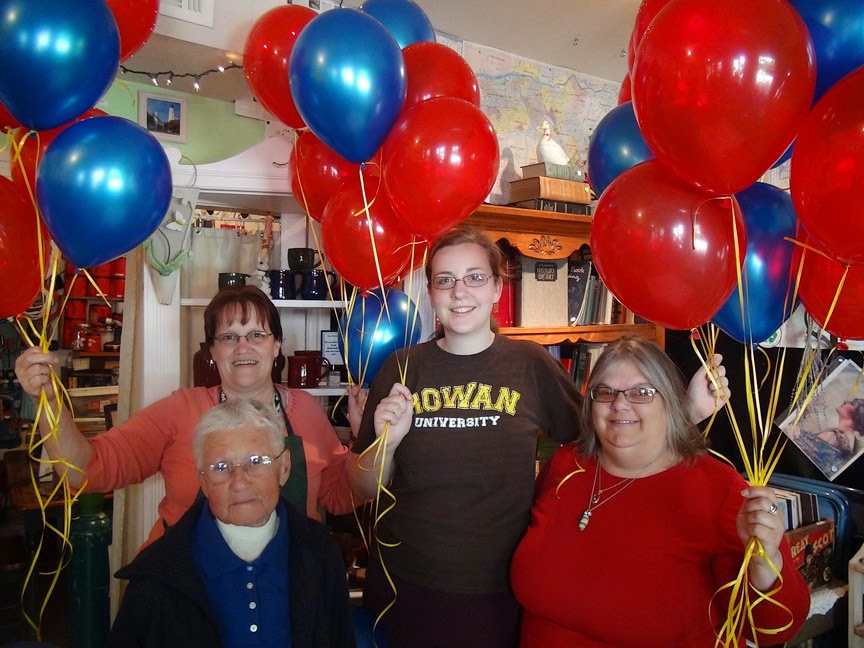 Once that was done, our official class was underway. I was there that day to teach a class on how to make a stuffed cloth ornament. The whole thing would involve sewing stuffing, and painting a specific cat ornament. Luckily, my students were creative, fun people willing to try something a little different. It was quite a fun day!

One of my class attendees, Rachel, started on her ornament...here she is cutting out the pattern from cloth... 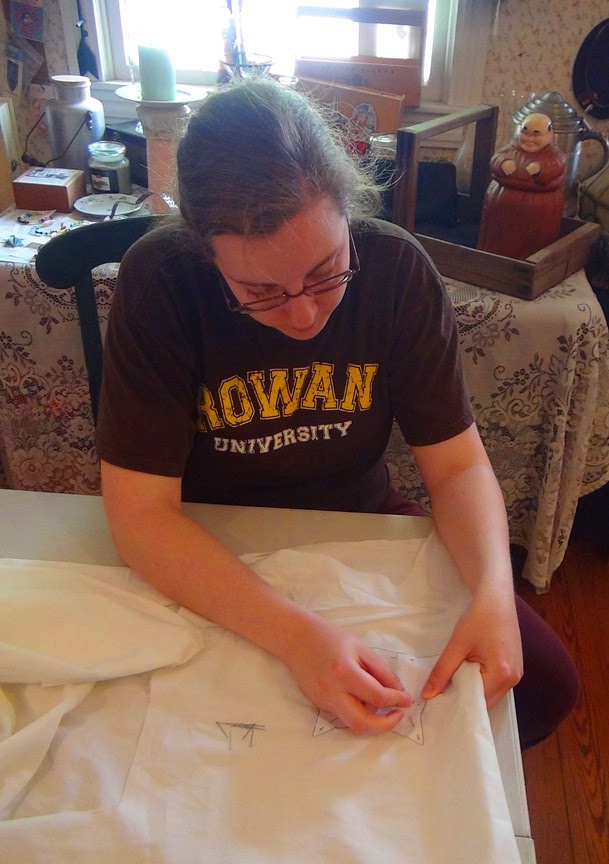 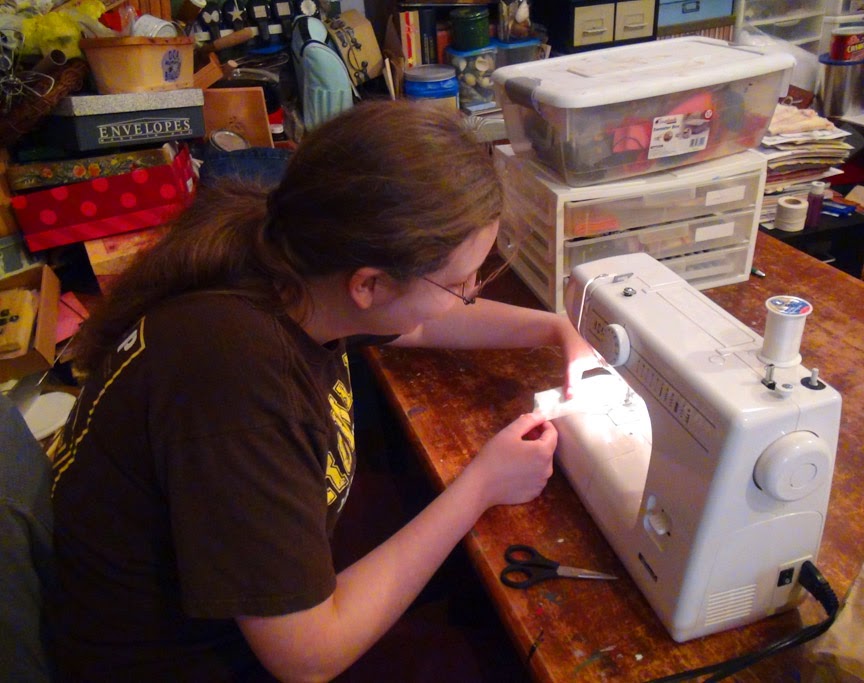 Her stuffed cat doll ornament is ready to paint... 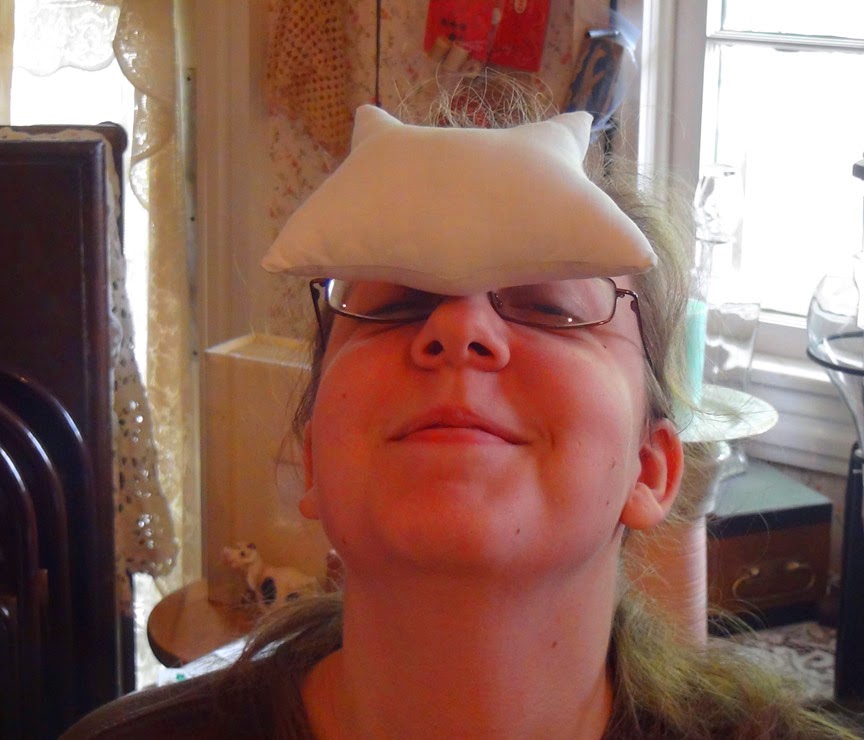 She and fellow ornament workshop-er Jennifer then proceeded to paint their ornament dolls, with some intruction.... 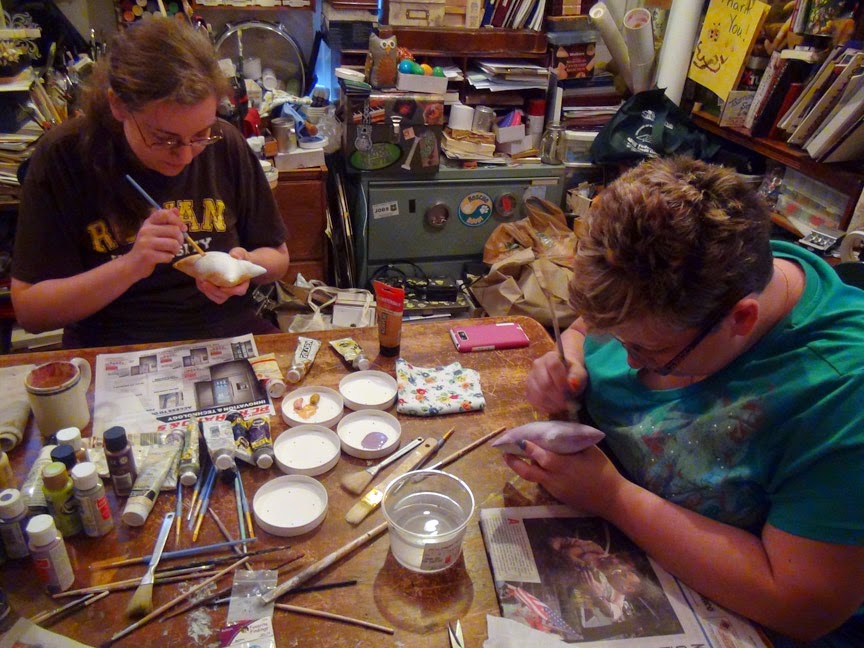 While fun, the painting did take some time. At one point, I excused myelf to the bathroom, telling the students to "try to keep from getting paint on yourselves" before I got back. Which apparently, was the wrong thing to say. When I got back...well, you might notice some shenanigans...notice the cat whiskers on these two?? 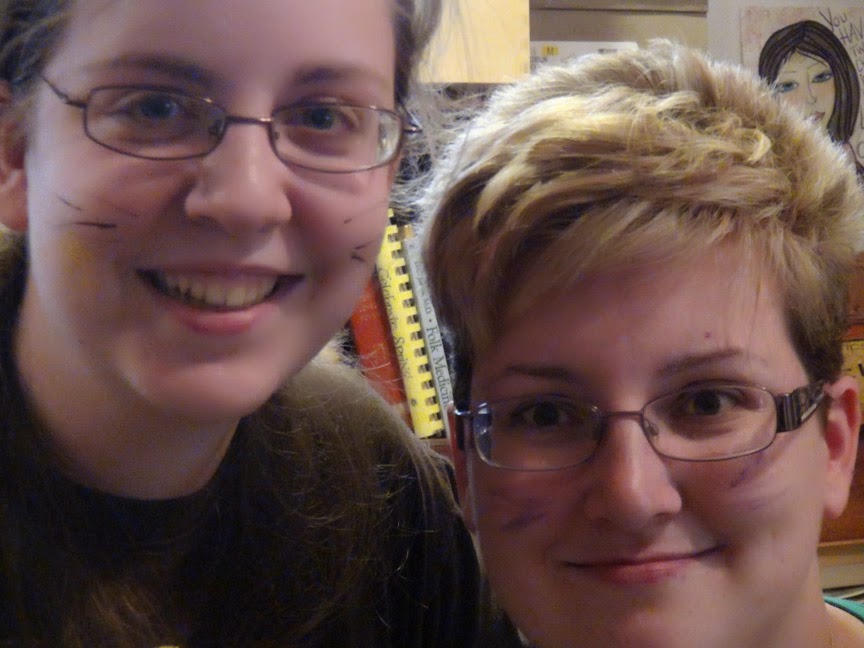 Lot of laughs, learning, and painting later, we have our finished ornaments! 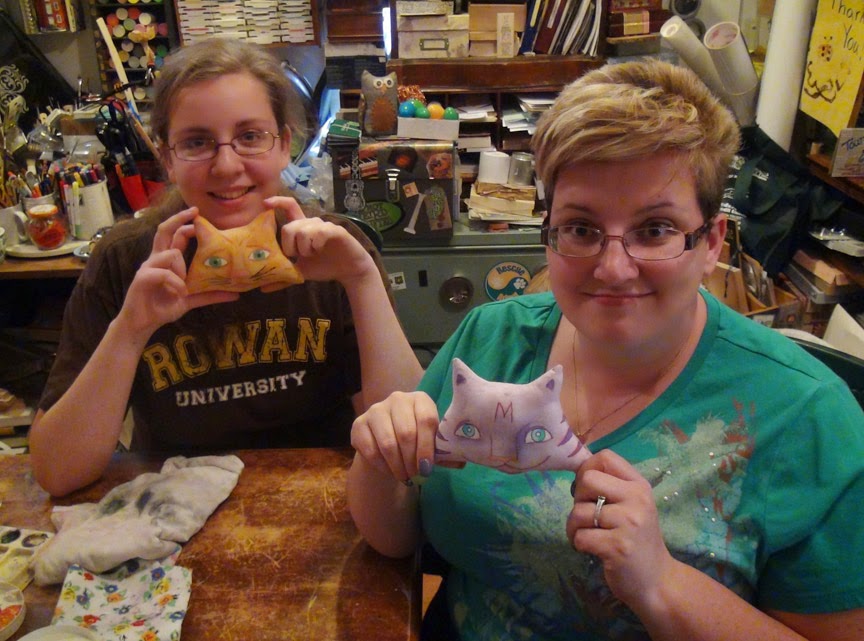 I loved teaching this class! What fun and great people. 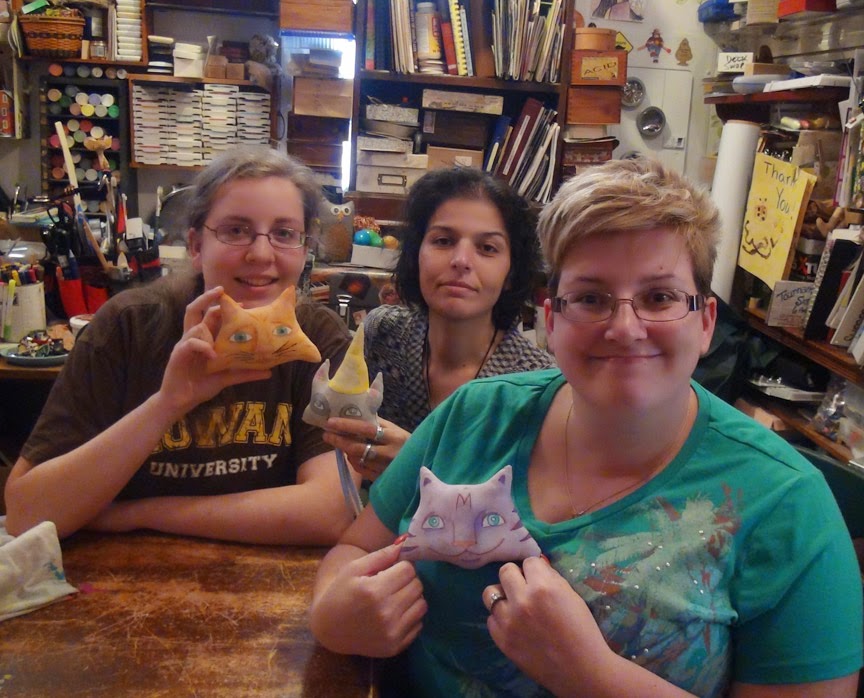 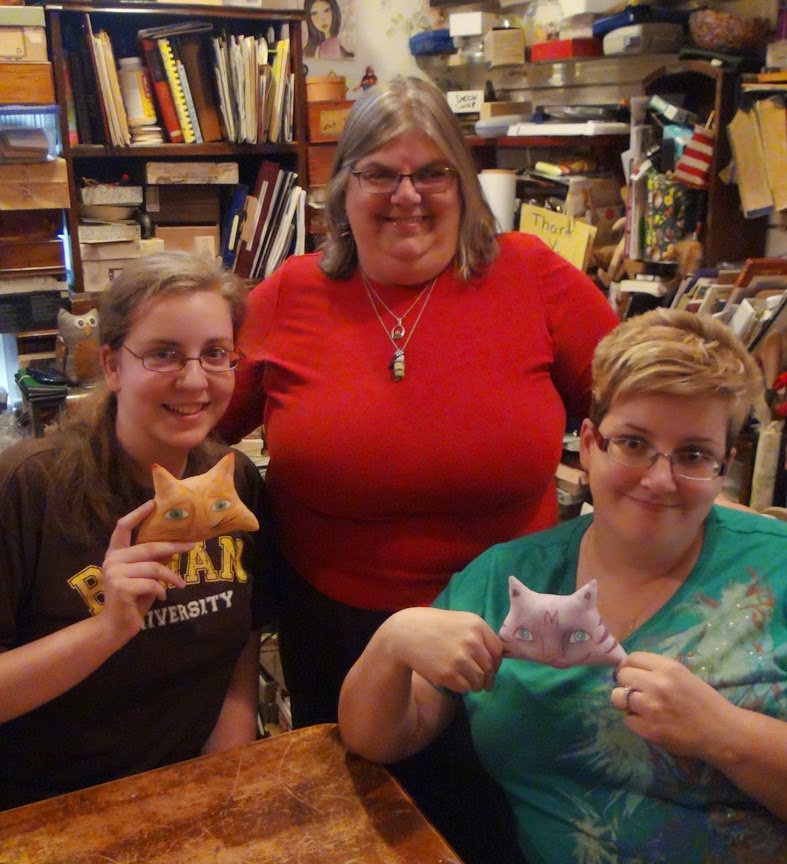 Our hostess, Holly (pictured in the middle of the above pic) was kind enough to field soap and art sales on my behalf while I taught. My "students" are a classically trained violinist and spinner (Rachel) and one of the shop artists (Jennifer) who also brought by the sweetest baby tutus she had made. It was wonderful knowing fellow artists were supporting my funny little classes.

And my Jersey stories STILL weren't over!
TOMORROW: Wild Cars and Woodwork...