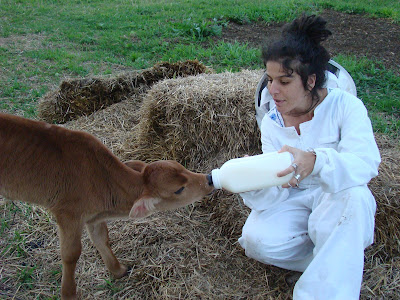 You may have heard that I have a certain affinity for animals (and if you don't know, then Call My Father), and while I'd like to think I'm the only one with this particular malady, I've found that others share this curious and gentle love for creatures great and small.

It's a tough thing, loving animals but, as I've mentioned before, there is a certain vulnerability that you crack yourself open to, because you must first guess what these beasts are trying to convey to you, you must learn to interact with them, and ---hardest of all--you will understand, profoundly, mortality and grief when you lose them.

In many ways, this has been the largest defining aspect for me--this juggling around between love and death, the constant questioning about "The Way The World Works," this brief, sometimes frightening stay on the planet--this knowledge of how very fragile we all are.

It is a peculiar thing, I suppose, to even think such thoughts, but there it is. I wonder if animals understand this, this fragile stay on the planet. Do cows, pigs, chicken, do they know that they are destined prey animals for so many other animals. Do they fear for the sake of fear, or do they run because they understand death.


Yes, such ideas are a profound and heart-wrenching soup to swallow, I guess. To love an animal is to open oneself to compassion and the bitter and sweet. Such are the tiny tales I now tell.

My friend Jenny is one such Midwestern chapter of this novel. Jenny B, as she is fondly known, is a beautiful and intelligent soul who works with her husband, administering Eastern medicine to help others. Her "secondary job" is as a bird rehabilitator for the State of Iowa. And Jenny was ONE SERIOUS rehabber. On this go-round, I had come to see Jenny's hive at her home. She had been a previous participant of both of my organic beekeeping classes and, therein, I felt there was nothing more to teach her. However, she had asked me to come "double check" her hives, and I was happy to do that, and see her.

Upon picking me up--I was greeted not only by my lovely friend, but by a mad cacophony of shrills, screeches, and chirps. Then entire trunk of Jenny's SUV contained covered up cages--all of wailing baby birds that marked the beginning of Spring. I was enthralled. I had known a few rehabbers in New York City, but this was serious dedication. Jenny took the baby birds with her everywhere so she could feed them roughly every 2 hours during daylight hours. She would feed them between her husband's clients, and more--it was quite the scene. The cages contained baby starlings, a few baby sparrows and grackles, a bird that was not native to New York, but which reminded me of a very small and streamlined crow.

As we traveled to various clients homes, and then finally to Jenny's house, she would hop out at stops and feed the babies formula with a small syringe: 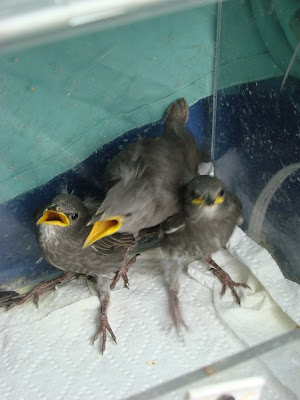 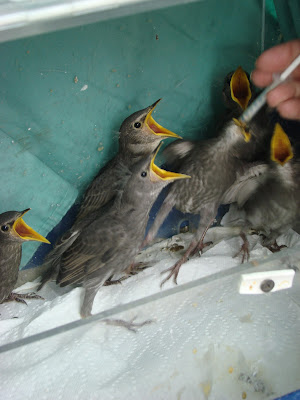 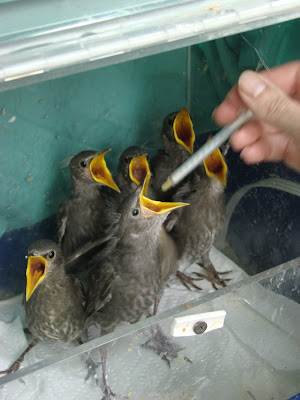 While this job can be very rewarding (especially releasing a fledged adult back into the wild), there are heartaches to be had around every corner. My visit was no exception. On the way back, we were met by two people who had brought birds with them. One fellow had found a young crow, but even as he gave it to Jenny, the pitiful thing, barely clinging to life, went stiff and dull--no fight left in him. I've no idea what happened, but could only stare a sleek jet black feathers, amazed at it's stunning attributes, even without a trace of life in them.

Worse still was the other "foundling," a baby killdeer. If you don't know what one looks like, here's a reference point:

Often, Jenny explained, since killdeer make their nest on beach shores (they are a shoreline/wading bird), they will lure away predators by pretending to be injured. However, many people find baby killdeer and assume it is orphaned, when the truth of the matter is that the parents are off looking for food or trying to lure away predators. And this is where trouble happens--often people scoop up the chicks, assuming the parent is dead, and might bring it to a rehabilitator like Jenny. And, she added, baby killdeer rarely do well under human care.

She told me this as she fixed an incubator cage for the little brown and white fuzzball that was probably slightly bigger than a golf ball. Only a heart of stone would be invincible to melting at the sight of this helpless little soul. AND, I was holding the tiny being as Jenny prepped its "nest"; after she prepped the incubator she put a wool hat in to simulate the nest. In the meantime, it was all I could do to hold myself together as the wee thing keep trilling a plaintive cry, burying its little head into my hand, and crying again. We would leave it in the darkened quiet room, it's peeping echoing in my ears for some time after we made our way up the stairs from her rehab room.

I could not imagine why and what in the Universe is compelled by baby animals dying so soon after taking a first breath, but then who am I to ask such things?

I couldn't have known about the Little Heartache when I visited my friend Rebecca Brandow, either. If you've kept up with this little tale, you'd know that I stayed with Becky on my second journey to the Midwest. She is an amazingly talented potter and passionate farmgirl, so much so that much of my stay at Becky's involved "llama shopping." Indeed, we visited a couple of places that bred and sold llamas, and I have been about as close to llamaflesh as one could get.

Since then, Becky's 7 acre farmstead had exploded in all sorts of animal species: 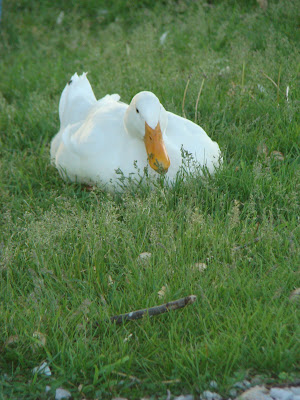 Yes, Llama's are at the homestead! I believe this one is named Starr.... 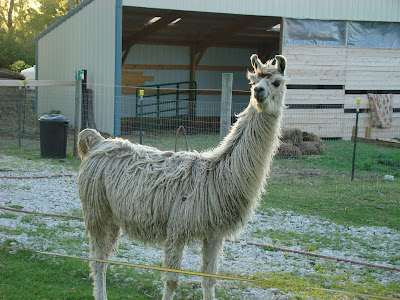 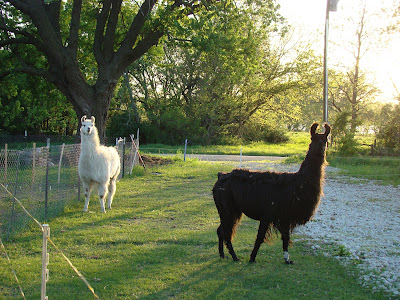 Brownie the sheep checks me out.. 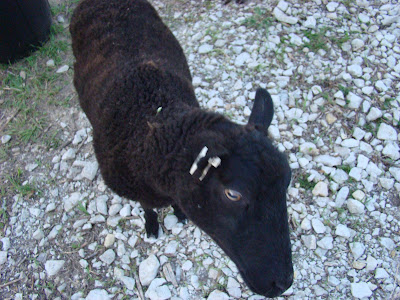 AND THEN...there was this little princess!! She was the newest addition to the farm, a heifer calf named Penny (short for Penelope, I think).... 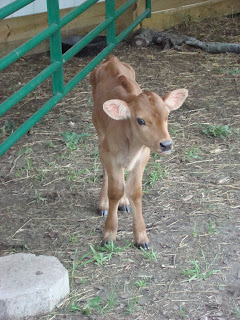 And while I was visiting Becky to check on her bees, too, we all knew it was to see this new lovely addition! 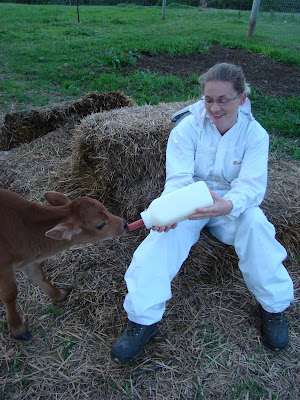 Zan feeding baby...note: we are both still in our beekeeping outfits, post bee inspection... 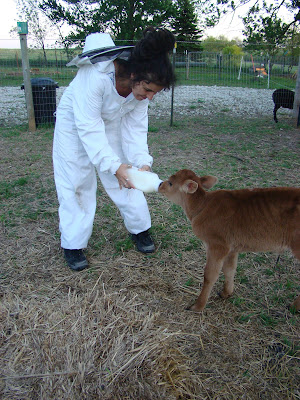 I had never been this close to a calf. She was beautiful, right down to her deer toes and endless eyelashes.. 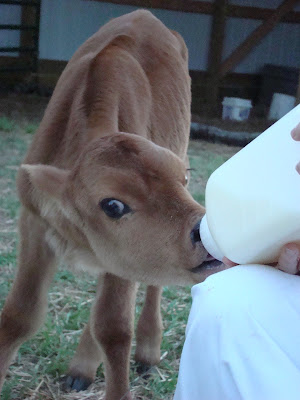 I am no farmer, but I wondered aloud why someone would allow a pretty Jersey heifer--a worthy farm animal as a milker--to be sold. Becky said the farmer told her that the calf was a runt. But, the baby was away from the mother, and was living alone in a big pen.

Ominously, Becky mentioned that the baby was the smaller of twins. Twin GIRLS. But the worry was that if she was a twin with a male, that she would be a freemartin--which means enough testosterone would have gotten through her system as an embryo to render her sterile. However, Becky said the farmer assured her that she was one of two females..... 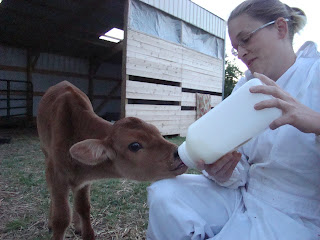 The rest of the day was spent relishing this cute baby, and the beatiful farm shared by Becky and her husband Brian. I would not know that the next day, the calf would be unresponsive, would not eat, and would eventually become lethargic. I didn't realize until later that Becky, an animal loving mother Virgo like me, would rush the baby into the vet's. I wouldn't know that at first, the vet thought the baby dehydrated, but then actually DID suspect the baby to be a freemartin.  And that because of this, perhaps some of the little cow's organs weren't working. And worst of all, I couldn't have guessed that a couple of days after my visit, this little cow would be dead.

It was shocking, all of it. I could weep for Becky, because I fell in love with the mooshie face and everything. I can't know all of what happened (and her own explanation is far more complete), and I'm not even sure if I should be writing this deeply personal love story between all of these people and their animals--or rather, the animals that have shaped their lives. But whether this is printed on paper, into cyberspace, or as a thesis, it wouldn't matter.....

These stories have been here for millenia, this fascination between human and animal, despite all of the little heartaches.

Tomorrow--The Tornado Woman, and A BIG ANNOUNCEMENT!
Posted by Unknown at 9:11 PM

Oh Zan, you have such a good heart. And yes, even I the meat eater wonder what animals think and feel. I know they feel pain but how much? Ours seem to recoup from little traumas so fast. I know they feel sadness, I've seen horses mourne for weeks after the death of a pal. And birds? At 53 finally find myself watching them closely. Animals have so much to offer all of us...