A cute buckling from Tamara's Zen Goaties
When last I left you, I was in the midst of the rare and curious life of Tamara Houseman, my friend, (spiritualist) farmer, and fellow vagabond.

How I find these unconventionally-living folk, I don't know, though I count it a curious and coincidental fact that I've never had so much luck finding people who so similarly decided to live along the fringes of life. By this, I simply mean that they don't dwell in cubicles, sweating their lives away under some conventional life chart--indeed, they have decided to color outside the lines of Life, recreating a map of their own World, as they see fit.

Tamara would consider this a form of manifesting, I suspect, and she is quite the revelation, indeed. Most might consider that simple farmer, but she had already gone beyond the stereotype of the typical woman in that she was the owner of her own road-side construction company and was remodeling her house with her own two hands. She would probably shrug this off with a certain level of humility, but there were so many little surprising stories surrounding her during my all-too-brief stay with her and her family, that one would say it was more than remarkable.

GOATS
Somewhere between the hullabaloo of running a roadside construction crew and general ideas about farming, there are goats in this fray. Yes, Tamara has a small passel of Nigerian Dwarf Goats that she breeds and truly cares about, with the mascot being the herd queen named Alex. They are keenly named Zen Goaties, and are a sweet group of flashily marked and mischievous beings that I was surrounded by on Tamara's own farm.

Here is a general gaggle of them now, mauling a trough during feeding time (and yes, disregard the feathered one on the left--no one reminded him he wasn't a caprine!) to their hearts content: 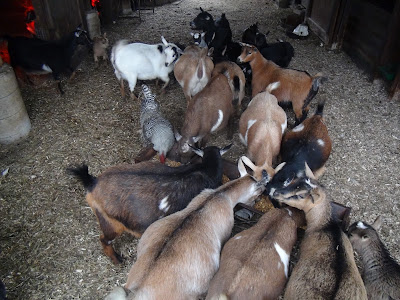 These creatures are but one of a menagerie of beasts that makeup the bucolic world of Tamara's farm. The goats share their property with a harem of chickens, ducks, a gang mob of cats, several horses, four very tall and loud dogs, and even louder peacocks (who loved roosting right above my second story sleeping quarters and wailing like women, I should add!) and peahens. It was quite an adventure!

GHOSTS
Perhaps the last thing one would suspect in the rough and tumble world of Tamara's is a good old fashioned ghost mystery. Which is exactly why a ghost mystery would pop up. See, Tamara's been revamping the old farmhouse she lives in and in one of her barns, she found an old hymnal book...and within the hymnal book?

I found Tamara staring over the hymnal book and the picture, and perusing the internet, one night. When I asked what she was doing, she explained the story, and that she was trying to figure out who the children in the picture were.
"How old do you think this picture is?" she inquired, still searching online for information.
I looked at the outfits. Finally, my long love affair with the antique world might be of use, I thought.
"I would guess not more than WWI era. They still dressed boys fancifully up until then, and stopped after the Great War. How will you know where to find these kids?"

"It's already written down," she said, and to my surprise, she flipped the card over to reveal handwritten scrawl that said this:
"Lewis Armstrong's Children, Aunt Sarah's grandchildren"
Lloyd     Vivian
Roscoe  Alvin

As I stared at the revelation, a family  and the children listed there, at the back of the picture....Tamara added another surprise: "It's the same handwriting as is in the hymnal book," and then she opened the front of that book to reveal a similar scrawl that listed the owner of the tome as Emily, with the exact handwriting as that of the back of the children's photo.

"So wouldn't this family just have lived here?" came my question, which seemed rather commonsense to ask, I thought.

"Nope, I already asked the lady who sold me this place. She's not related to one of them, and she's only lived here twenty years. The people she brought this place from aren't related to this family, either."

I stood, stunned, staring at Tamara. She had already been researching this, and she didn't strike me one bit as a historian or an enthusiast of this kind of curious research.

"Did you try city records?"
"Not yet, but I just want to be able to give this stuff to someone, alive, in this family." And that, indeed, seemed like a kind and touching thing to do.

Alas, I didn't manage to take a picture of the actual picture of the children, but with a little research, Tamara and I DID find an online source for the family, which DID put the children's birthdates right at the turn of last century, as I suspected. Unfortunately, we managed to find the boys under a registry of GRAVES, but at least we had a starting point. You can find Roscoe Armstong Listed HERE and Alvin listed HERE and the links should backtrack to other family members, though the site does not list living relatives

I'd be curious if anyone near Chillicothe county IL (where Tamara now lives) or Peoria county, IL, where most of this family seems to have lived and died would have a way to run with this story. It would be wonderful to find a living relative so that Tamara can bring some kind of closure to them in these small tokens of the ghosts that have crossed her path. I dare to wonder what sort of lives these children grew to have, far past the staid pictures and songs sung in faith from a book of music. So much of our lives are fleeting, so much changes with time....

Indeed, soon enough I would be leaving Tamara, too, for another place to teach and learn, and this time, it was with an old friend on an old farm, indeed, there would be goodbyes (and hellos) all around! 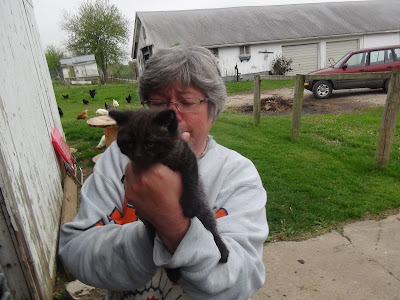 TOMORROW--The Amazing Miss Effie, Round THREE!
Posted by Unknown at 7:11 AM

Labels: Beyond Vagabond Project, farm dreams, farm friends, Illinois, journeys to the past

Zan, you writing just keeps getting better and better. What a great story! Loved the gaggle of goats too. ;o)

I am trying to catch up with my favorite Blogs since I have been away for a bit!

I am loving reading all your posts I have missed!

Those goats are adorable!

Zan, how many little Zen goats are in your suitcase? I mean it. How many?!?!

Thanks for the sweet words, Denise and Dalyn ;)

Thanks Lulu! You are quite the globetrotter, also! I love the goats!


Ahahahaaa, Donna! You are onto me. I may or may not have folded quite a few cute animals into my suitcase! :)