It's the Bridges of Madison County, Heffa... 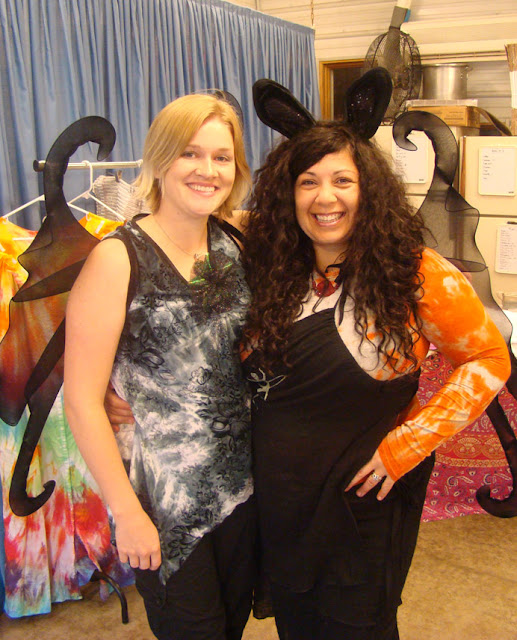 There is a certain advantage with staying at the home of kind people, along this peculiar route of mine. And that is, you will learn so much about your hosts, people in general, and the lay of the land, than staying at a sterile hotel.

Unless you like that sort of thing. But for me, I will rough it on various couches, air beds, and other sleeping quarters. I will eat along the lines of what other people eat (home cooking all the way, or eat out), I will talk about a million ideas and I will try to see what they see, everywhere.

And in this way, I am blessed, for there is so much to see and learn in all of these places I've stayed. I have ridden in electric cars, wrangled horses, seen small curly feathered geese, visited with Midwestern bees, gotten dirty--and loved it. These might be off-put by some folks, but they are as legitimate as any other life. All are different, all are beautiful, all are happening right now, whether someone cares for it or not. The variance of life is what makes it exciting, and I say this from a place where even I thought certain ideas, and people too wild for me.

Dawn Torrents-Suarez might just be one such whirlwind, possibly more outrageously unconventional in living than I am, and rightly unashamed of it. For who is the master of the rules of their lives? No one but each individual, and individuality is Dawn's forte.

To be fair, I should have seen it coming--I'd known Dawn from my previous trips to Iowa--a massage therapist/henna artist/hooping instructor, she has mad a good living from these unconventional endeavors. And while Iowa is the land of bartering, she may be the ultimate queen of this trading, having traded food, clothing, fuel--heck, I was waiting for her to tell me her mortgage was bartered (it wasn't, but why not, Big Banks, I say?) Plus, she earned my respect for running with the New Yawka word "Heffa," and made me a cute bracelet with the slang term, which I shall treasure forever.

But that was just the beginning--Dawn owned a stunning piece of land--10 acres with a pond, long and luscious stream, woods, and a large field. She tilled it wearing dresses, ran the creek with the fury of a true nature mama, rescued what seemed like every downtrodden beast in the vicinity (three dogs and five cats...or was it six? And some chicken and ducks. Sidenote: favorite chicken name of the bunch has to be Li'l Kim) and changed her mind, and schedule on a whim. She was clearly her own person, and I admired her for it.

Perhaps more admirable is her love for her husband, which is tempered by the fact that he is a Gulf War veteran. I'm not really sure what makes sense to write, here, but I will say this: it is so easy to dismiss the horrors of war by the people ravaged by it, but the American government chooses to do this. I will say this apologetically.

I daresay we, as a society, may find more concern with the latest celebrity, tech gadget, or other fancy, but meanwhile, there are people who truly have gone out of their way, have their lives (and their family's lives) near shambles with what they have seen and done, in the name of  "the good war". My summation of thought is this: very few soldiers have fared well because of war, very many warmongers have.

Dawn is a brave and patient woman, with a loud laugh and unpredictable spirit. There is something to be said about a woman who will get three hives, find out she is allergic to them, and STILL KEEP going with them, anyway. We spent time dodging bees, swimming in her calming pond, dodging ticks (this city girl is NOT used to them at all!) and planting all sorts of trees and bushes on her acreage (I told you I didn't mind getting dirty)!

Probably the funniest time? When she kept egging me on to drive one of her cars by myself, should I want to go anywhere. Mostly, this worried me because I'm no good at driving in places I've never been and---who nelly--I'd never driven on stoned gravel roads before. Give me a blacktop highway, or the soft, sandy, Southern dirt roads, and I'm  great (well, let's not go into the rainy season and dirt roads) but the dusty, dinging gravel..that was another story. Eventually though, I did manage to buckle up and drive over gritty and smooth roads. So thank Dawn for making me an independent Iowa driver!

Dawn lives in Winterset--which is surprisingly famous, for two reasons: It is the birthplace of John Wayne, and it is home to most of the bridges of Madison County.

The Dukes house is actually nearby the main downtown area...which is charming in it's own right. Here are a few bits and pieces of Downtown Winterset: 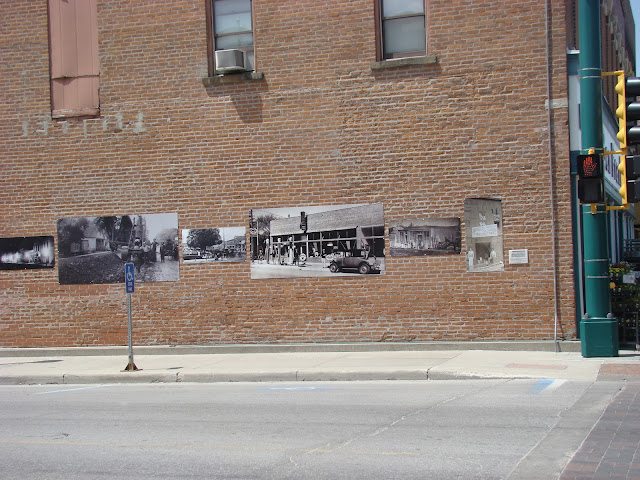 Which is actually the side of the Ben Franklin Store...a popular "general store in Iowa's towns (consider it a precursor to Walmart, with way more character, to boot!). Notice the cute nursery plants outside... 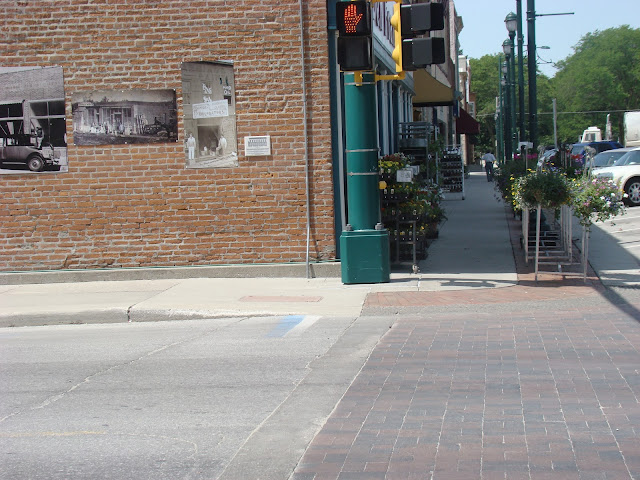 The domed clock-tower of city hall in the center square of the town...lovely! 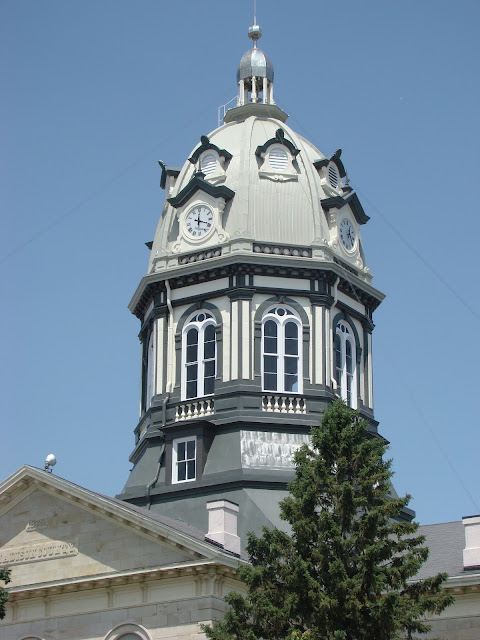 And here is the home where John Wayne was born. It's a sweet little sort of hexagonal home. Alas, no one was allowed in to visit...

Beyond that, there were the bridges of Madison county. Amazing luck! Dawn literally lived a couple of roads from the one called Hogback Bridge Road. So on the last few days of my stay, I rustled up my newfound  Iowa driving skills and rumbled over there.

Call it my own New York expectations, but I was used to a "famous place" being so...quiet, serene. Not that I was complaining in any way, but it was a pleasant surprise, a welcome quiet. Meditating and calm. The bridge is one of several covered bridges in Iowa, the only ones left in the United States. You can read a bit more about them HERE.

Hogback bridge was simply there waiting, off of a curvy road.  Like the girl in the simple dress at a party, she didn't ask for much. She just was what she was, take her or leave her, but underneath the exterior, there was tons of history. 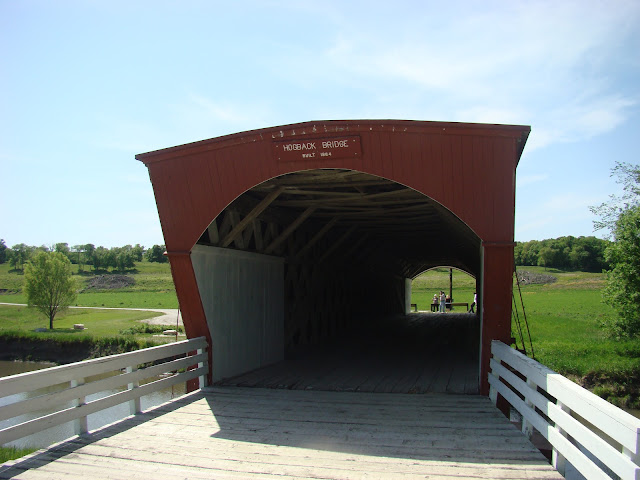 Hogback showed off her red attire, and once inside, there was the truth: tons of graffiti--how old some of it was, I don't know--but there were tags and sentiments on all of the old buttresses and historical working--tag scars for this old gal. 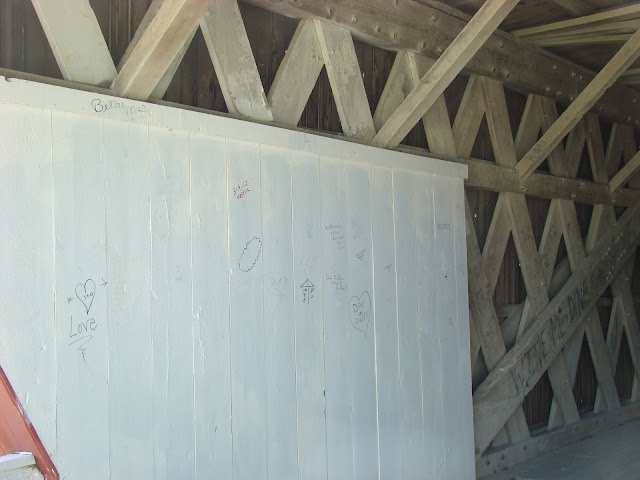 But she was beautiful, still...stretching across the river channel she was placed over. Call it my imagination, but there was a still sense of reverence, the idea of old ghosts still jangling around this place. I could almost guess who drove here, and the days gone by that the old Hogback had seen.... 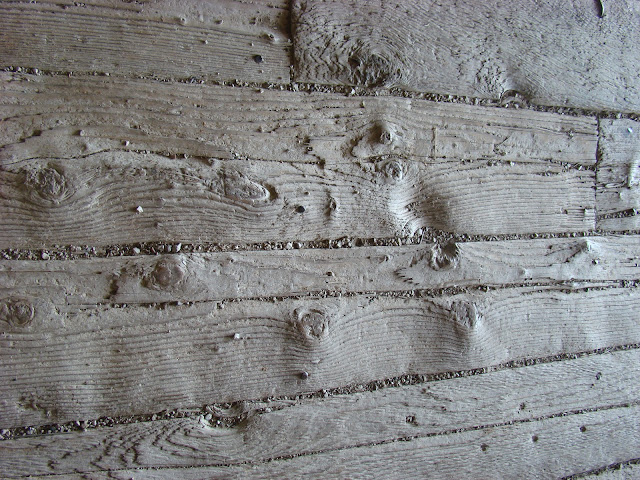 Opposite view, from inside the bridge... 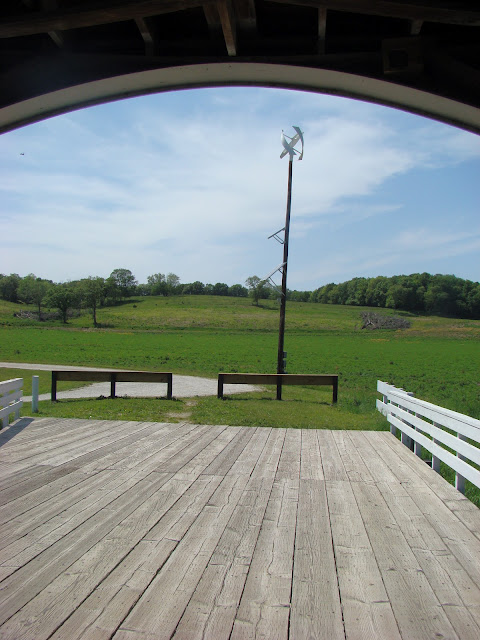 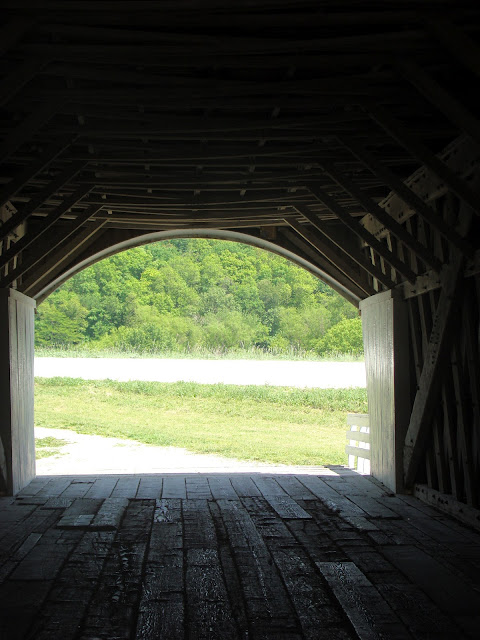 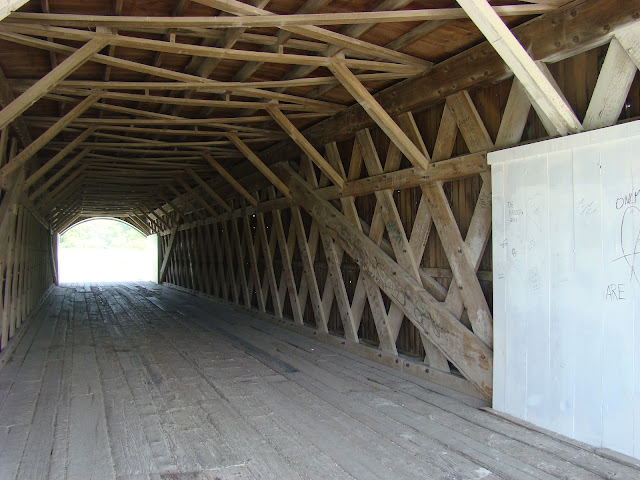 A lovely surprise--on one side of the grand walls of this elderly bridge---a "sign in book" which said "how does this make you feel"....I never did know if this was something official, or whether a whimsical soul had decided to create this on the spur of the moment. But you know I loved it! 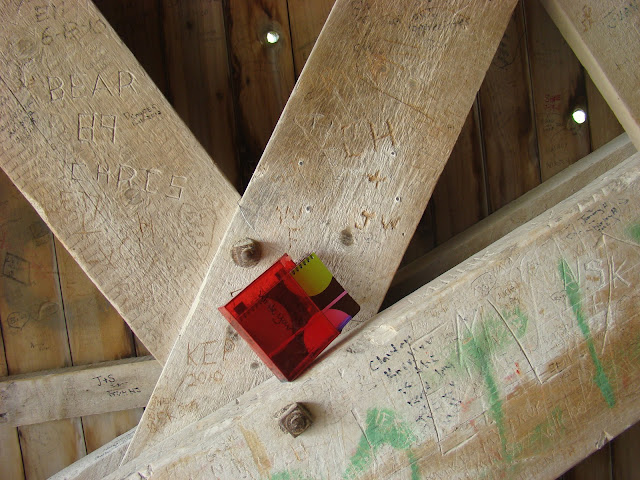 And indeed, it is this unconventional way of thinking, being and doing, that keeps drawing me back...who says Middle America doesn't have wit, courage, ingenuity, and creativity that the big city folk brag about. What rubbish thinking is it that has led us to close our eyes to all of our courageous and genius friends and neighbors!


Welcome to America, Heffa, land of wonderful people and places....

TOMORROW--- a well known, wild-haired horse and wagon riding sort of gal talks about MOVING TO PENNSYLVANIA! Yep!
Posted by Unknown at 3:25 PM