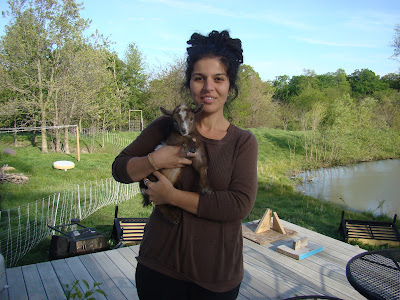 See this mischievous munchkin? She is the unofficial greeter of Antiquity Oaks. Once Donna and I drove from Donna's farm to Deborah Niemann's rambling acreage, Deborah greeted us with her large dog, Porter. And then--poof--this little fuzzy popped out from behind the large canine with a small but pointed bleat. I'd never seen a house-goat before. Folks, we weren't in Kansas anymore.

The unexpected is part and parcel at Antiquity Oaks, and Little Miss--the baby goat in question-- is just part of it. She is smaller than a chihuahua: one of a group of triplets, she was only one pound at birth. She immediately was taken to the house to be bottle fed. She has since made amazing strides, jumping jack rabbit high, running up and down stairs, head-butting the dogs, tasting curtains, rugs, clothes. She is quite the little mascot. I spent the entire stay at Deborah's negotiating how to stuff her into my suitcase for a one way ticket her to New York City. She is small enough to pass as some sort of exotic dog, I think. 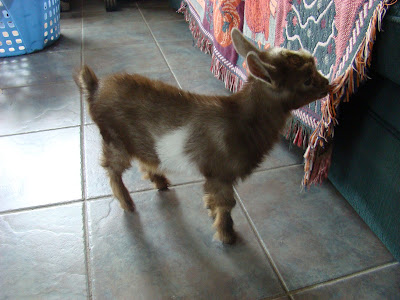 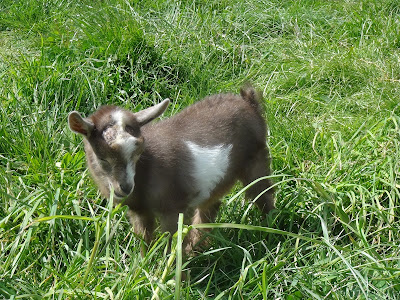 Antiquity Oaks is the thirty-two acre  testament to the sustainability movement that Deborah and her family has practiced for over a decade. Their goats and cows provide milk and cheese, they have maple syrup from their own trees, chicken for eggs, a garden for veggies, and sheep for wool. Their life is one frenetic ball of energy of their various interests and activities. Deborah Neimann lives there with her husband Mike, and three children--or rather, two children, and one newly moved to Chicago for her new job.

I had met Deborah when interviewing her for The Renegade Farmer, in regards to her book Homegrown and Handmade. Her own sustainable life on the farm can be found at Antiquity Oaks. 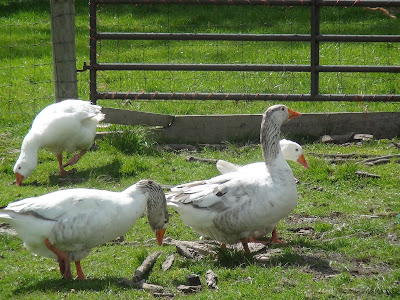 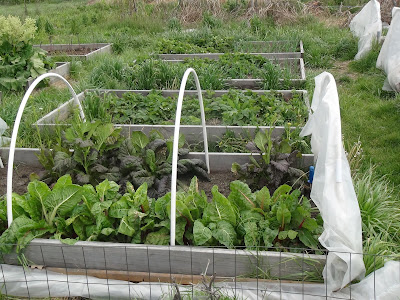 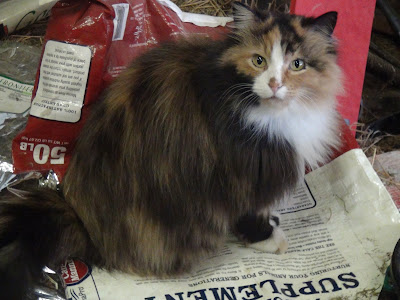 Merlin the guard and fiber llama... 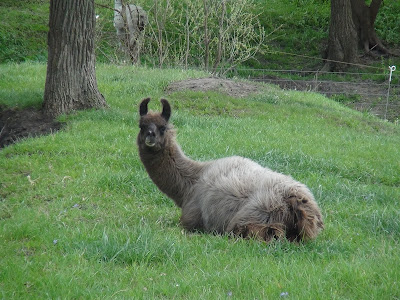 I was surprised by many things during my visit to their homestead--that they REALLY do seem to cook all of their own meals, and was happy to see that their son did much of the cooking, that a professional family still could be fully self-sustainable (Mike is a professor of engineering, Deborah is a writer, teacher, and speaker), and that Deborah can be both so accomplished but somewhat introverted about it--although frankly, I think it's rather a case of me being a bit too extroverted (read: loudmouth) because of my New Yawka York City upbringing and performance arts training.

I was there for their latest venture, beekeeping: they had just acquired two traditional hives in order to garner themselves some honey. I would be teaching classes at their home, but what ensued were some wonderful talks about writing, the process of promoting yourself, fair payment for homegrown products and similar subjects that I believe benefited both Deborah and I.  I have to say in my travels, I have seen a lot of independent, quality farmers and small business-men (and women!) undersell themselves. Their understandable argument is that raising their price above a certain price point would bracket their products out of the reach of local customers, whose incomes were extremely limited. However, my argument is that quality will attract certain customers who will understand your worth. They are still out there, there is still hope for American goods and services. And of course, I will say to those who truly want quality to support your local farmer and artisan, it will mean the world to them!

For Deborah's part, she is extremely well versed in sustainability, and sustainable methods. She is a great advocate for her farm, and transferring that knowledge into techniques that anyone can use. She is funny and outgoing in ways to bring more diversity to her community, a great planner of events, and a mean cook: you will be amazed at what you eat at Antiquity Oaks!

She and her husband are intelligent and hardworking scrupulous folks. Mike calmly helped around the farmstead with chores, has a love of astronomy (he is hooked up to alerts that tell him what to watch in the night sky), and is clearly interested in all thing electrical engineering. They drove me around one day in their electric car. I'd never been in one, and stared in awe as a dashboard screen demonstrated when the car used electricity and when it switched over to conventional modes. I barely understood much of the conversion rates, and when or why the car shifted through it's various modes, but it was definitely gas efficient, and fascinating to see. I kept joking that it would be an accident prone vehicle in my hands, I'd stare at all of the bells and whistles, and not the road.

Their children are the most put-together young people I have met, with more going for them than I remember having at their ages. Life on their farm seems productive and frenetic--there were animals to tend to, problems to solve, book contracts to negotiate, people to speak to, children to help, schedules to organize.

Apparently, there are dangers to tackle as well, as demonstrated in the day I went to help Mike fix a fence post (note: by me "helping," this meant tagging along and NOT getting in the way of his work). Of course, baby goat Little Miss HAD to tag along as well, since she clearly supervises everything and everyone. So off we went, small goat running jack-rabbit-ishly in tall grass. We were actually fixing a fence in the sheep pen, one run by a largish Shetland ram named Stormy.

The fencing itself was not a problem. Most of the sheep ran from us as we traversed on field, with several steps to get to the gate that would lead us outside of the pen.  We wouldn't be lucky enough to clear it. From around the corner, I suddenly spied the ram sprinting at us. To be fair, I think he probably could have charged us faster, but it was enough speed to realize he was making some sort of statement and--more importantly--he was right in the path to trample one small and oblivious baby goat.

I quickly said to Mike, "This ram is coming right at us and the baby," and then quickly bent down and scooped her up. I remembered to stay calm (all that vet tech training in my previous life finally DOES pay off!) and jaunted quickly out of the line of fire.

Mike impressively stayed calm and and huddled down, not unlike a line backer, and took the blow (and the ram's horns!) in his palms. He decided to turn the animal around and send him back with his ewes, but the ram wasn't having it. He took a few steps, then spun around and came right back at Mike with the same maneuver. Mike took the blow the same way again. This was getting complicated.

Clearly, the ram could not be let loose. Mike was carrying a heavy metal post hammer and I was carrying a baby goat that was gawking at being held. But we couldn't let the ram go. 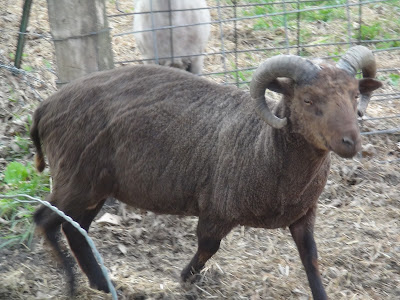 Mr. Ram. Up close and far too personal... 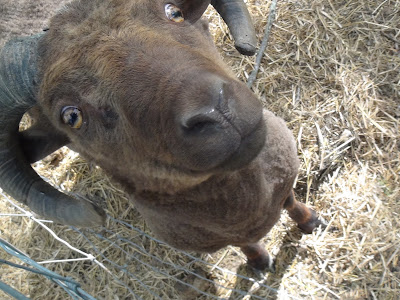 I volunteered the idea that we should WALK the ram over to the gate we needed to go through, and THEN let the beast loose once we got on the opposite side of that gate. We agreed to do so. I didn't think the ram was horribly violent, but just dangerous enough to bruise one or both of us over and over. I understood the fellow, he was doing what male sheep do all of the time--he was protecting the girls. Still, I breathed a sigh of relief once we both got to the other side of the fence and let our horned friend go.  This definitely didn't happen in the big city.

On my last day with Deborah, I attended a green festival with her, in which she was a featured vendor. We spoke with several wonderful people about her books, a future homesteading conference that she would be hosting, and much more. I truly believe in her work and am looking forward to her new book Ecofrugal, coming soon to a bookshelf near you. I hope to work with this tireless advocate of sustainability again soon.

It would be wise to learn from such a person and her family, as we all could be self-sustainable in our own ways. I will miss her and her family...and of course, Little Miss!
Posted by Unknown at 7:51 AM

i adore you. i adore goats. so this post just made my day! looking forward to reading more about your adventures.

(btw, this is megan from mobile~*)

Thank you Megan! I adore you also--how very kind :)

I love reading about your adventures, Zan. What beautiful animals! Thank you for sharing your journey with us. I so enjoy reading about it.

Can't say enough about this website – its alot better than mine.