The Memory of Trees 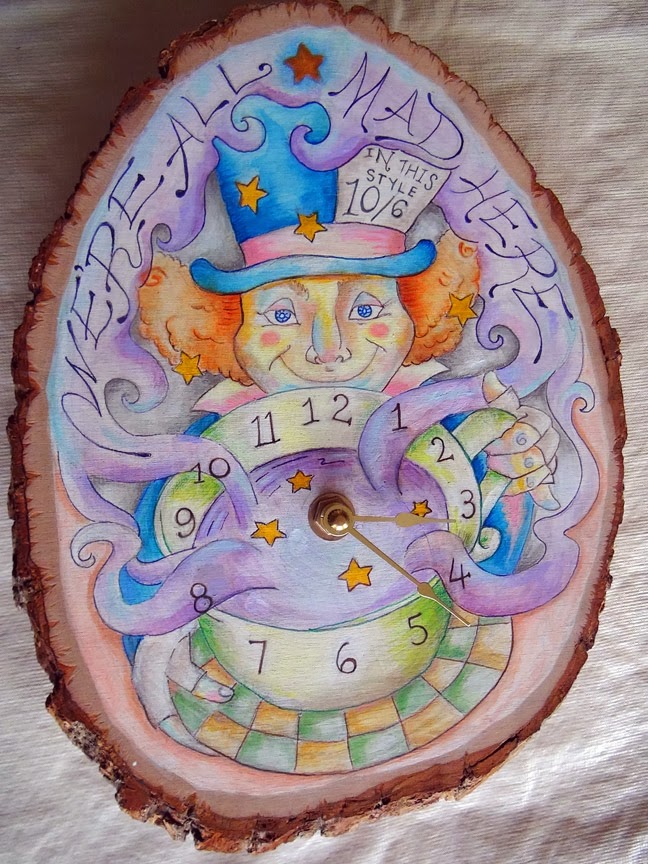 If you are not careful, you can be swept up in a wave of busy-ness, and that is apparently what has happened around here, lately. In many ways, I am woefully behind in a laundry list of plot twists I had planned for 2014--writing and traveling and teaching and...and...
But no, they would not be happening, at least not at the moment.

See, I am lost in The Memory of Trees. Which, I suppose, is appropriate for my strange, forested heart.

What, exactly is The Memory of Trees?  Ask any woodworker, any lumberjack. Heck, ask a person tapping maple syrup, even. They will tell you. Their tongues will drip with tales of sap, bark, the smell of leaves in the Fall, or pine needles in the Spring. They will speak of arching branches, the smell of green wood, or even its smell tindering under flame.

Some of us are lost in trees, in greenery and forested shoots. It's a far more ancient thing, a connection to trees, which is a connection to us all. Their fair-leaved dressing wag with with the coming of Spring, and their nakedness tell of the severity of Winter. They breathe out our air, as we breathe out theirs: it's a deep coexistence, these lives of ours.

I am no representative of the grandeur of trees, but the inside of me has been pulled out by THEIR insides. I work with flat logs, you see, and my fingers grapple painting such fine canvases. But beyond painting, there has been an interesting development.

You see, these are TIME keepers, these dissected trees, and there is a certain, strange justice in this. What better to have these olden arbors serve as a reminder of Time, itself?

I remember, distinctly, having trees cut for me during my journeys to Kansas, and since then, logs of various sizes have been subject to the brush and pen strokes that have made up the tick-tock world inside my head.


Chainsawed logs from dead trees on a Kansas farm... 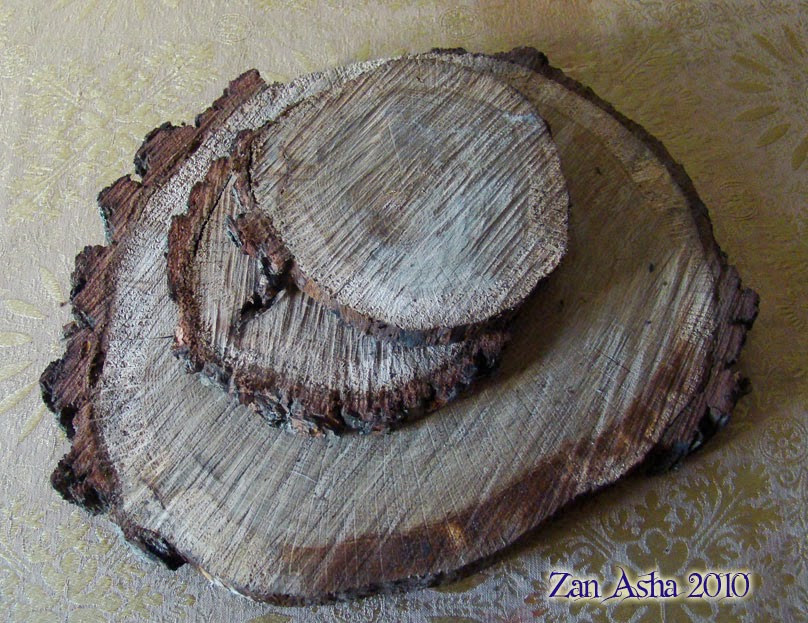 To be fair, I wasn't quite sure how to proceed with it--ANY of it. I've been doing folk art in some form for several years and, at best, I had humble sales of these little bits of hand and heart, just enough to be encouraging and certainly, I have been grateful for those loyal followers who bought a thing from me for various years.

But this Christmas, I was bowled over by this strange new interest, especially when I finally, after several years of reading on clockworks, decided to make one.  It was an Alice-In-Wonderland whirligig, and the reception given to it was as furious as a young debutante's debut. Not a bad suprise, all in all....and it was not over, either (curioser and curioser)! 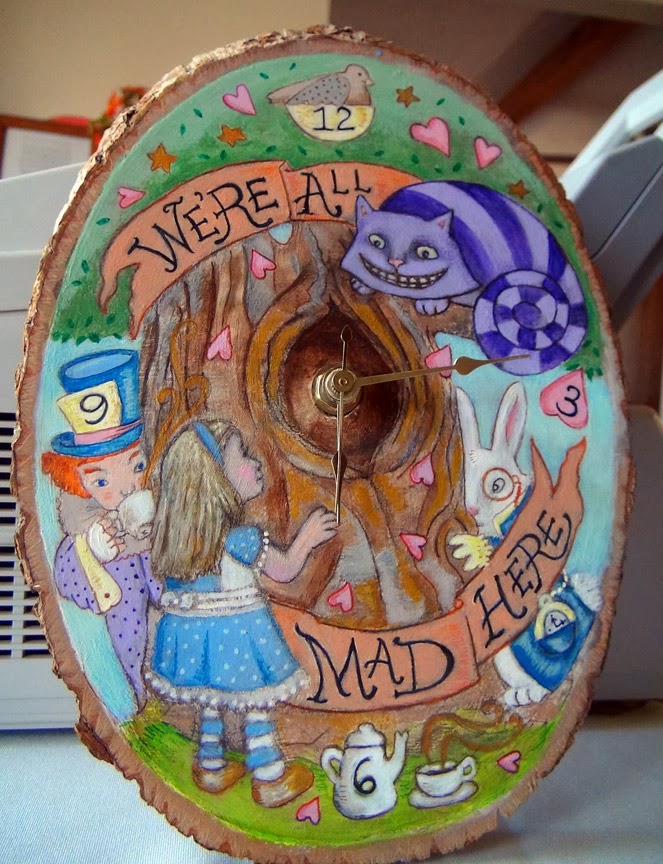 Wonderland was the winner, apparently...and soon, there were more wild and wooly clocks to be made: 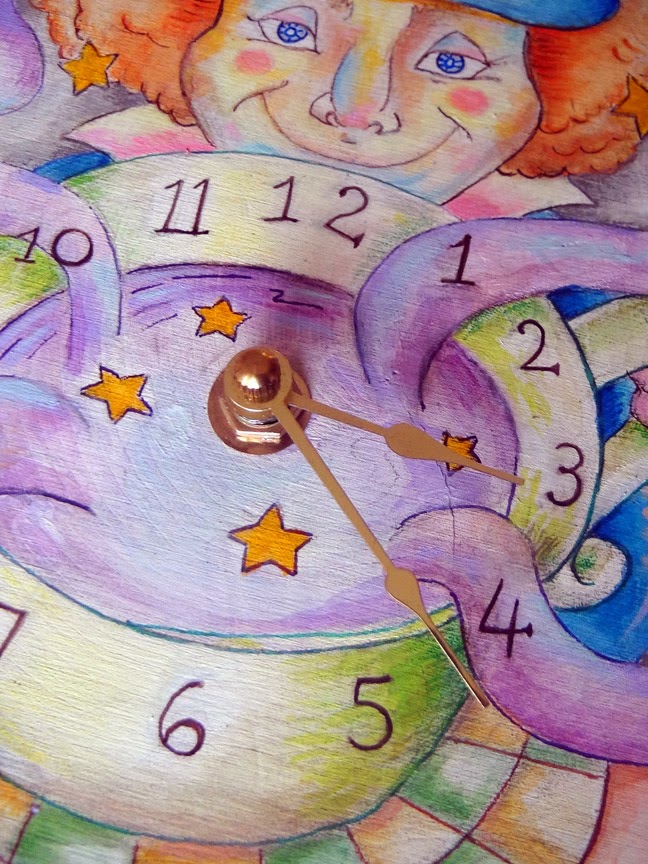 And here, three more commissioned for a farmhouse! 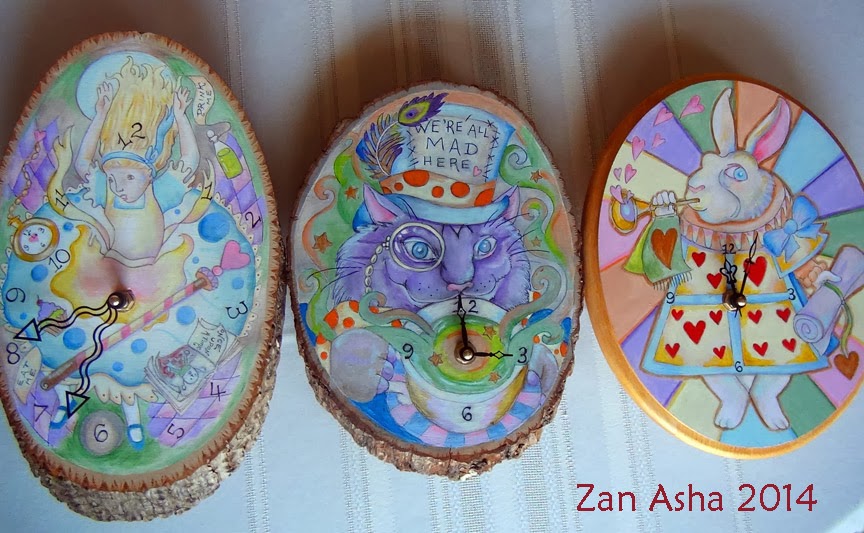 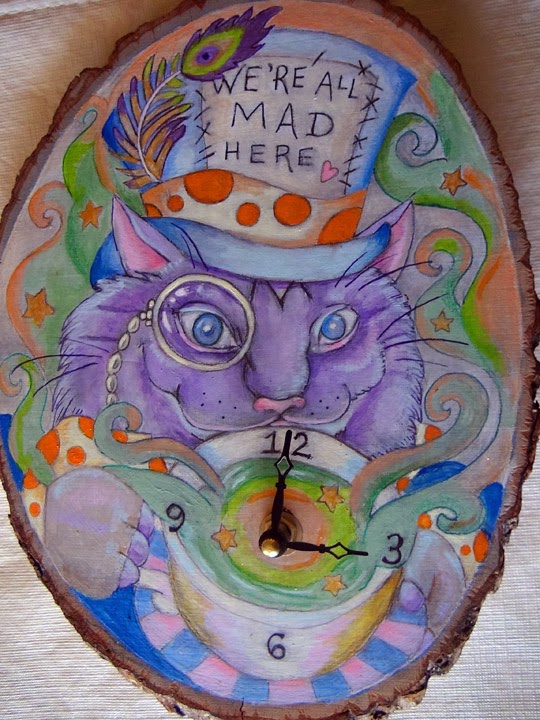 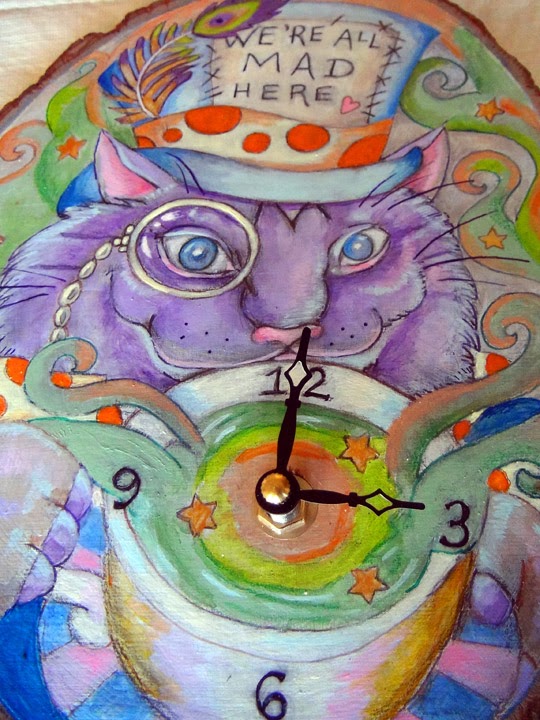 Down the Rabbit Hole... 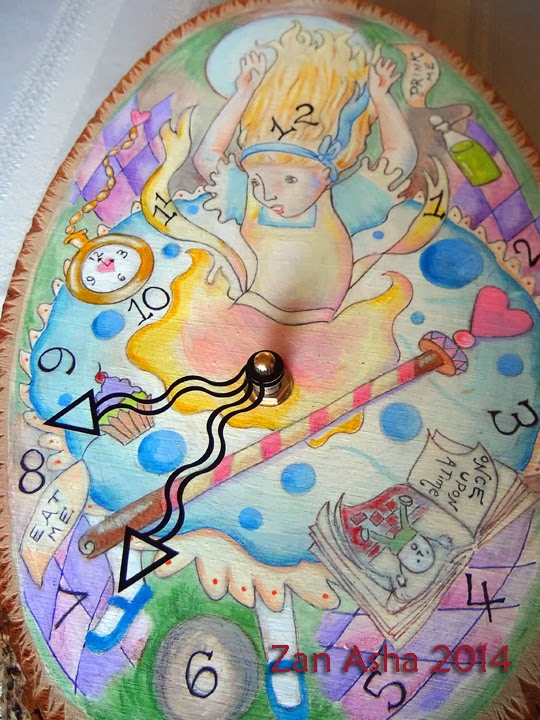 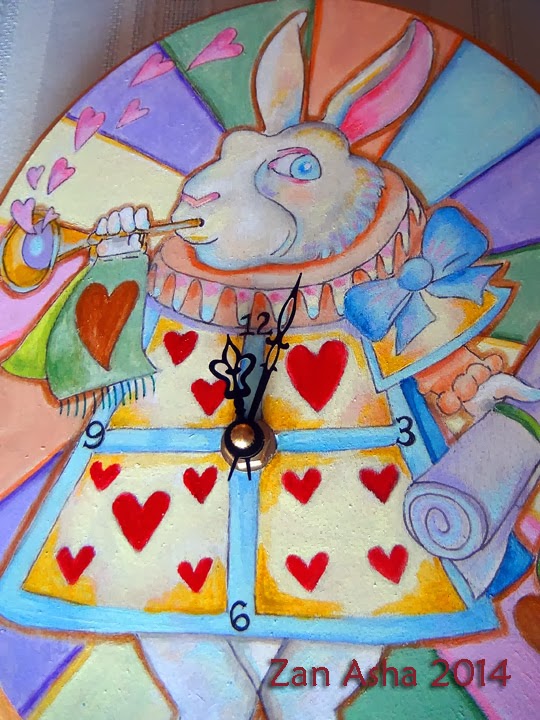 Indeed, I have been quite blessed, as people have found some resonance about these. I'm not sure if it is either the magic of Alice or the idea of a one-of-a-kind-clock but I won't ask too many questions on the formulation of this funny little success.

There are more to be made, of course, but it's a slow process. The utter irony is that an outdoor active person who is used to traveling is a bit fidgety when sitting two or three hours at a time, though the painting itself is an ode to meditation and a joy.  However, the clocks are made only by 4 hours minimum, and over several days, and much experimentation of paints, colors, wood bases, and clock parts do I finish these pieces.

Because of it, I can sometimes only finish a clock in 3 or 4 days time, in between the rest of life's requirements, and several copious cups of tea, and fine music!

Because of this, I thought to offer some clocks at specific times--perhaps the beginning of each month?  I have no idea if this shall work or it seems to ubiquitous?  In any case, I'll at least try it out--

So, these fellows are "under construction," as they say--a few offerings which should be ready February 5th, just in time for Valentine's Day!  Here is a sneak peek at the process of clockishness.... 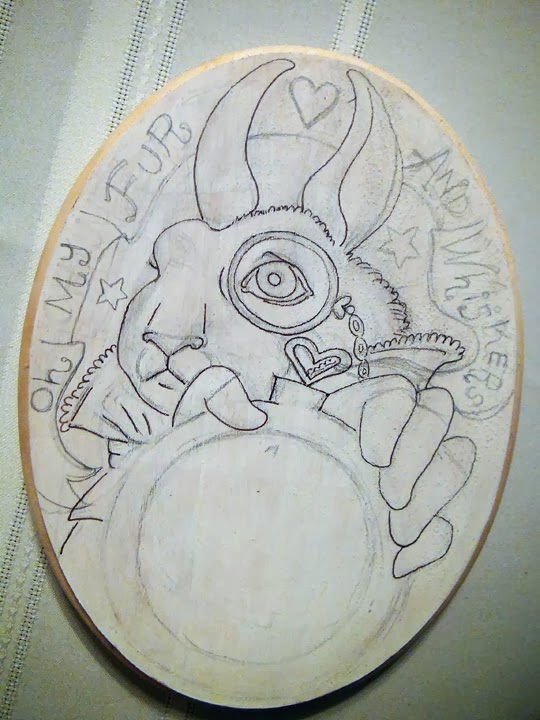 ...and he's gotten a bit of a facelift with paint! 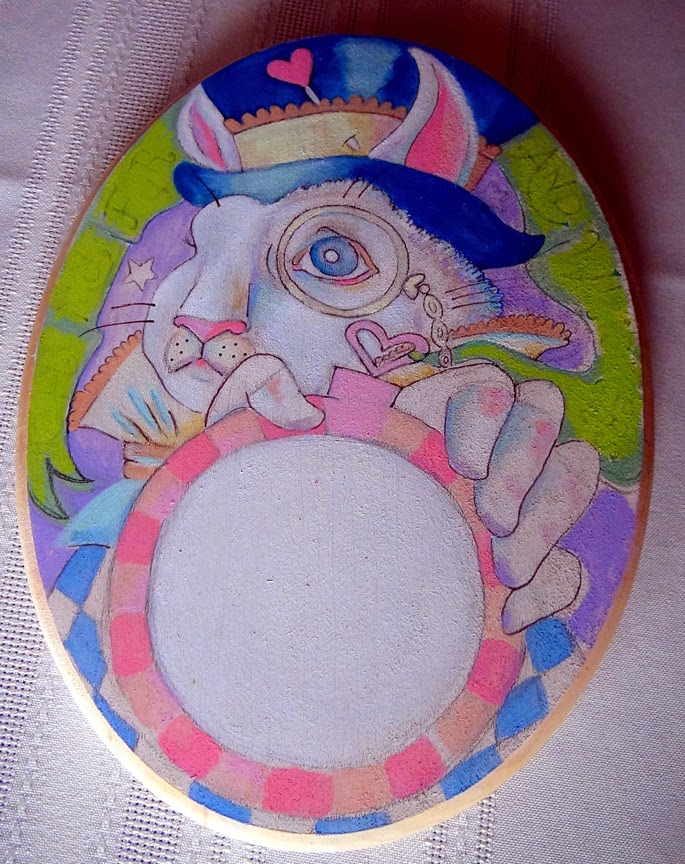 And a brand new Cheshire Clock now being drawn up! 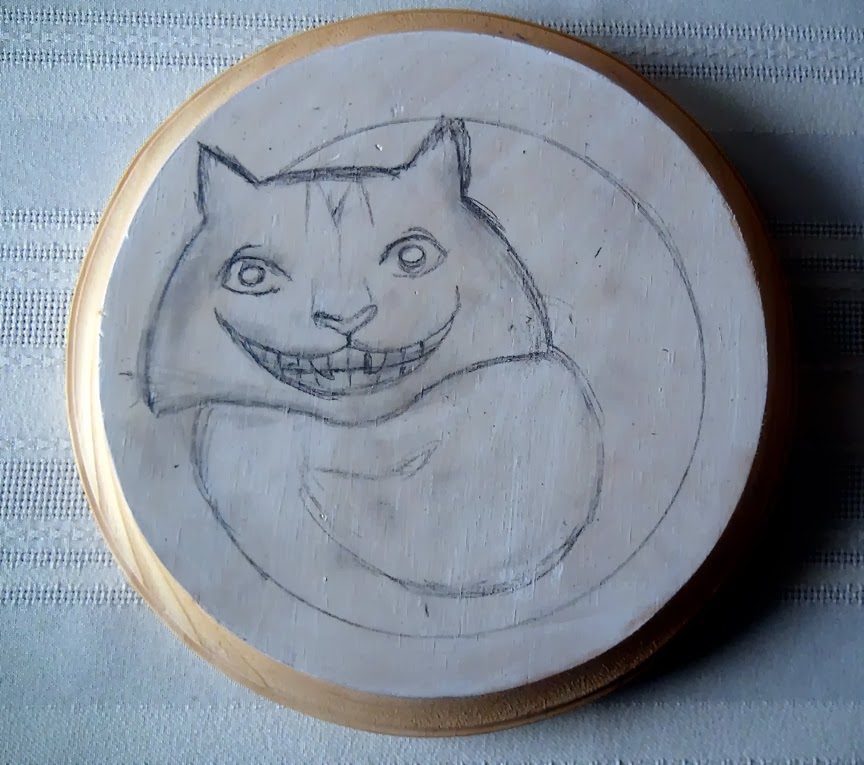 And This Fellow, already spoken for and going to a new home soon! 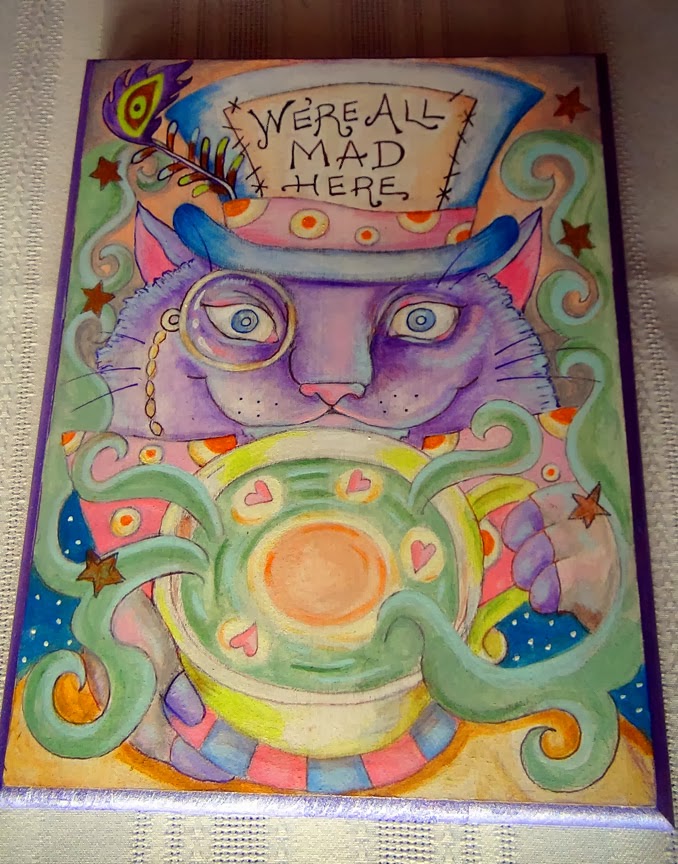 And so, this is the story of trees. And it wouldn't be the only story happening around here--the next would be of travel, and more!

So love your post and it's such a wonderful feeling to think that sometimes...just sometimes..you are talking just to me. I LOVE trees...the way they grow each individually grow straight or curved or even bent at an angle...the way they smell...the way they dance in the breezes inviting me to join in. I respect the ancient ones and never harm one. I do like to use slices of the ones that have passed on...just like you do with your amazing clocks. I believe you are on to something...showcasing some at the beginning of each month. I mean you must have time to follow some of your other musings too.

Oh Zan those are adorable! Have you ever approached a publisher of childrens book about the need for an illustrator. Your talent needs to be spread far and wide! Hope you are well.

Hello~I was wondering if I could read your interview with Tasha Tudor? I tried to find it on the Big Town Farmer site, but it does not load. Thank you! :)

Thank you so much Regina and Donna! I am having a nice time with it :)

Texas Mom--I am really sorry, but Big Town Farmer has been defunct and taken over a while ago. I'm just wondering where you found that we did the interview, in the first place?