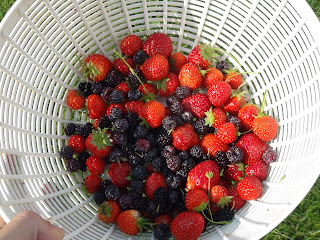 It’s mad as hares, ‘round here; the world, or my tiny corner of it, roils with its own kind of busy-ness. Mind you, it’s not a big city type of run-around, that sort is more about catch up travel and hustling.

No. This is the the sort of busy that has one feeling productive, accomplished, and full of wonderment. Or, perhaps, there is time to just savor it all.

The highlights to my busy seven day adventure


The Never Ending Fruit Patch: People, I have never seen so much free (and tasty!) food. As I mentioned before, the boss-friend has generously allowed me to pick some of the beautiful berries on his little farmstead, and forty cups of strawberries later (not including those that magically popped into my mouth somewhere between picking and refrigeration!) I am awash in berry goodness. There have been strawberry jams, strawberry shakes, strawberry shortcakes…..strawberry overload, but I’m not complaining!

The Vegas Kitty:  Animal high drama ensued when boss friend’s  TWENTY year old cat disappeared for three days. Yes, Warren was upset (who wouldn’t be?) but having spent one of my own nine lives as a vet tech, I knew that felines were a wily bunch. Some part of me guessed that she actually was off taking a jaunt in the large great outdoors, and that she would probably be back.  Warren was sure she had been hit by a car, attacked by stray cats, or had gone off to die.

“No,” I assured him, “she’s like one of those little old ladies taking a road trip---they go to Atlantic City or Las Vegas and play the slots,” I joked.

This seemed like a good thought--but by day two of Missing Kitty, spirits were low. I had suspected the animal would be home by dinner time the night before, and the next morning without the cat brought a somber reality to everything.

Day three continued the grey mood, and the day echoed this by bringing rain and dark clouds. We slogged through work and ran back to the farm.  As we rounded the corner of the farmstead house, I heard a plaintive wail amongst the sounds of the downpour. Just as I put two and two together, Warren sauntered from the other side of the house proudly carrying one very wet, elderly cat. Shed been huddled up along the carport, having come from who-knows-where.

We were soaked, but I had to laugh. “I told you she went to Vegas, and the casino. From now on I shall call her Vegas Kitty.”

Run, Rabbit, Run: New York is known for many things, but cars dodging random rabbits on the road? Not so much. Yet here, on THREE different occasions, I had to truly test my granny driving skills in order to avoid smooshing fluffy bunnies. Toto, we’re not in…New York anymore.

Lost: Yes, I was, often, and usually while on a road. Or a highway. I’m afraid I’ve been spoiled by the steel machined world and the mechanics of the mass transit system of the Big Apple. It’s easy to not pay attention to where one is going, if a train or bus conductor does this for you. It’s much harder to then navigate a totally foreign system  in a different state, a never ending labyrinth of exits and off paths. There is no apt description to the hilarity (or panic) that ensues when one takes ONE hour to get to a location FIVE miles away.

Squirrel Adventures: The boss-friend is constantly trying to keep squirrels off of the farmette, but this is admittedly hard to do when one has nectarine, apple, and peach trees. The codgers love the food growing here, so boss-friend is constantly using humane traps to grab them. He then takes them off into another neighborhood to release them. On my excursion back to my place later, one day, he asked me to take the latest “prisoner” to release it in my area. I blinked. Stared blankly at him. I’d never released a squirrel before. He assured me that this was perfectly safe, even placed the cage in the back of the car with a brick weighing down the front to keep the squirrel from crawling out. Of course, there was a wee bit of concern when I made a drastic turn (on one of those maddening highways) and I heard the THUMP of the brick as it fell off of the cage.

However, all is well that ends well since the squirrel didn’t budge, and then made a mad capped flying dash out of the cage once I opened it. Happy Journeys squirrel friend--may you avoid being caught in the future!

OTHER WILD AND CRAZY ODYSSEYS:

I picked asparagus for the first time.
I found a patch of wild garlic…and later scrambled it into an egg.
I went to a cute town made up completely of old historic houses…

AND THAT IS TOMORROW’S ADVENTURE: Into Mechanicsburg PA
Posted by Unknown at 4:16 AM

Hi Zan..enjoyed reading your post this morning. Loved Vegas Kitty...very familiar story. :)
Pennsylvania sounds very much like Tasmania..except we don't have squirrels we have possums.

Have you made any dolls recently?
xgrace